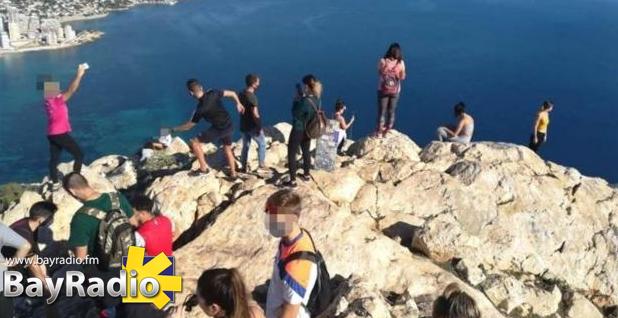 Calp’s lack of COVID-19 ‘control’ has been featured as the top story on the Valencian Community’s biggest newspaper, Las Provincias.

“It was like the mountain queues up the Himalayas,” said hiker Fransisco as he climbed Calp’s Penyol d’Ifach last weekend.

Accompanied with a series of photographs, Fransisco told Las Provincias that few fellow hikers respected the ‘1.5m social distancing’ and at least 25% did not wear masks.

“We were crossing people at every moment, making it impossible to keep social distancing.”

He said that, with bars and other venues for entertainment closing, he’d never seen the iconic Costa Blanca mountain so ‘busy’.

It comes as other protected natural areas in the Valencian region – the Serra Calderona and the Serra d’Irta – have also been overloaded with hikers during the second wave of the COVID-19 pandemic.

It also comes as Spain brought its R infection number below one last week – read more.

The Valencian Community has also spent over 40 days with the lowest COVID-19 caseload on mainland Spain – read more.