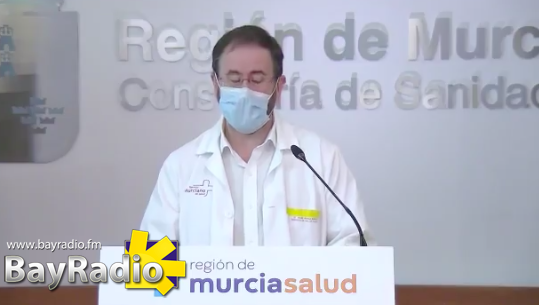 Just two days prior – on Saturday, 7th November – the Región de Murcia ordered all bars, cafés and restaurants to close. 30th October also saw the prohibition of movement between municipalities.

But according to an update from MurciaSalud’s spokesman, Jaime Pérez, the measures have ‘worked’.

“We are flattening the curve – yes, it’s good news,” the spokesman for MurciaSalud said.

Pérez added that each one of the Región de Murcia’s 45 municipalities experienced a drop in cases per 100,000 inhabitants (accumulated incidence) – except for Puerto de Lumbreras and Yecla.

He said that, on Monday 9th November, the region recorded 797 new diagnoses. A week later that figure has reduced three-fold to see 280 new coronavirus cases.

Pérez said the situation was still ‘delicate’ however, as hospitalisation figures take longer to flatten than those of daily new diagnoses.

“The pressure on hospitals is still worrying,” he said.

These numbers are nevertheless down from 632 in hospital a week ago.

The fall in figures means Murcia is one of only three autonomous communities still in the ‘alto’ high-risk category according to Spain’s four-tier COVID-19 alert system. Read more here.

It joins the Balearic Islands and Galicia – although the Valencian Community has a lower accumulated incidence today than both those regions, it is on ‘extremo’ extreme risk due to UCI occupancy. Read more here.