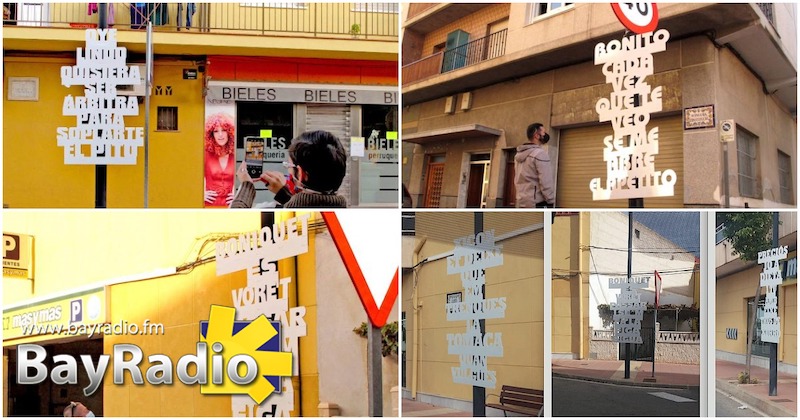 El Verger’s government put the signs up yesterday (Monday 16th November) in anticipation of the UN International Day for the Elimination of Violence Against Women. *EXPLICIT

“Hey handsome, with those nuts I could make a mean stew.”

Public, vulgar pick-up lines might seem an odd way to celebrate the UN’s International Day for the Elimination of Violence Against Women.

Indeed, they are causing anger in El Verger after the government plastered them across town on Monday, in anticipation on 25th November.

The governing PSPV party have put up white signs – deliberately without explanation or warning – and already are being demanded to take them down again.

“It’s disgusting. To walk around town and read these types of messages is not pleasant. The public do not understand,” came the rebuttal from the opposing Partido Popular party.

“They are having the opposite effect. We have already heard from teachers, even outside our municipality, that pupils are passing each other photos of the signs.”

The opposing Compromís party also hit out to say the signs are ‘out of context’ and have ‘zero educational value’.

Both opposing parties have demanded the immediate removal of the signs.

El Verger’s ruling PSPV government has said the campaign was intended to be ‘brave’, ‘attention-grabbing’ and ‘aggressive’.

“A ‘piropo’ [cat-call/ chat-up line] has a physical and aesthetic quality that transforms the receiving person into an object – ‘pretty’ in most cases, but always charged with sexual undertones.”

The statement quotes data that, by age 19, 90% of women have felt ‘intimidated’ by men cat-calling and whistling in a sexual nature on public streets.

The work was created by Spanish ‘technofeminist’, educator and artist Vero McClain.