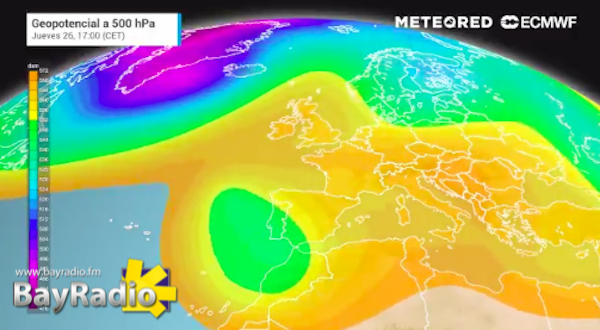 Alicante University’s climatology lab has said there is ‘high probability’ of a gota fría in the middle of this week (25-27 November).

“There is now very little uncertainty of a gota fría hitting the Spanish mainland in the middle of this week” – so reads the latest update on Alicante University’s Laboratorio de Climatología.

What’s not yet clear, however, is how much rain could fall on Spain’s Valencian Community.

If the cold blast moves towards Algeria, this would mean ‘locally-intense’ rains on the Mediterranean coast and Southern Andalucía, according to the Lab.

This European model is showing a blast of cold, polar air will separate itself and move south towards Spain at the middle of this week – this is otherwise known as a gota fría.

Watch a visual from tiempo.com showing how this works:

Spain’s met office, AEMET, is also expecting 100% chance of rain from Thursday this week in the Valencian region.

7-day predictions show rainclouds with 100% probability on Friday, while Saturday has a 90% chance of rain so far.