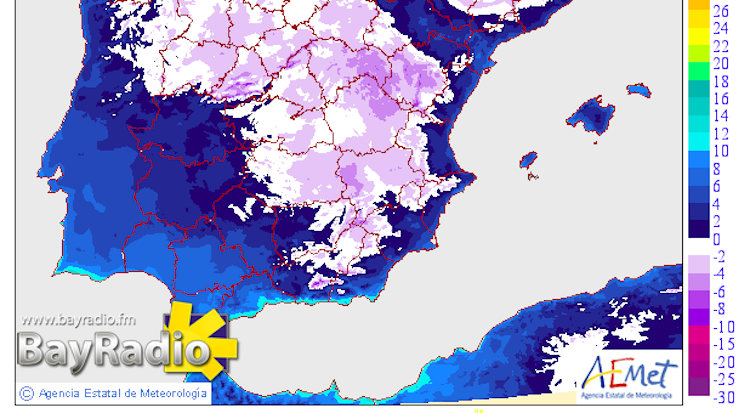 A blast of ‘maritime polar air’ will hit Alicante this Thursday, leaving snow above 800m and temperatures below 0°C in the mountainous interior.

An arctic blast will hit Spain this week, blanketing all the northern mountain ranges in snow and pulling temperatures down to -15 in the Pyrenees.

The cold front will reach Alicante on the Costa Blanca too – snow will blanket mountains over 800m and interior will see temperatures as low as -4°C.

In the Marina Alta (home to Denia and Javea), temperatures will fall to -1°C in the Vall d’Alcalà, while Castell de Castells will see 1°C.

Meanwhile temperatures in Javea on the coastline will fall to 4°C on Thursday, before picking up again from Sunday to next week.

The coastal regions around the Marina Alta have also been put on a yellow weather warning this Friday.

AEMET is predicting gale force 7 winds from 9am – 3pm.

A post from the climatology lab at the University of Alicante explains that a blast of ‘maritime polar air’ from Greenland will sweep West-East across Spain this week.

The lab said the blast will also bring strong winds and high waves to coastal waters around Spain.

The lab added that Alicante will see the first snowfall this winter between Friday evening and Saturday morning.