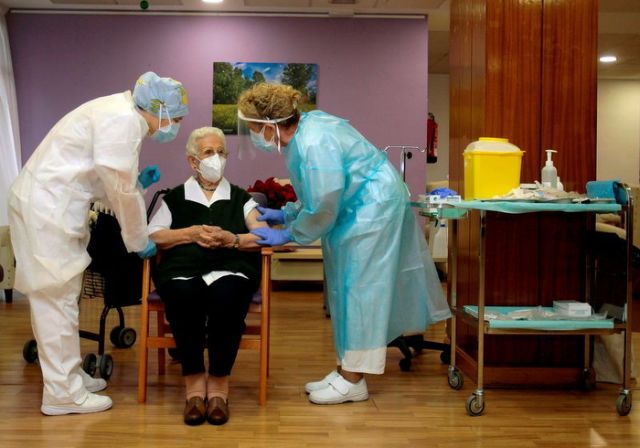 Yesterday saw the first immunizations administered to residents of senior homes, but Health Minister Salvador Illa called on the population ‘not to let its guard down’

After months of the pandemic in Spain, the first doses of the Covid-19 vaccine developed by the Pfizer and BioNTech laboratories have begun to be received by the sector of the population most at risk: seniors who live in homes and their carers.

The first lady to receive the vaccination was Araceli Hidalgo, 96 years old from Los Olmos residence in Guadalajara. Then came Josefa in L’Hospitalet de Llobregat, Antonio in Granada, Nieves in Santiago and thousands more.

The first batch of vaccines, some 9,750 doses, arrived on Sunday in all of Spain’s regions, and over the coming 12 weeks a total of 4.6 million doses will be delivered, serving to immunize nearly 2.3 million people.

But we cannot relax just yet, on Sunday Spain’s Health Minister Salvador Illa called on Spaniards not to “let down their guard.” The coronavirus is continuing to spread through the population and a third wave threatens to marr the celebrations over the arrival of a vaccine. “We are looking at the beginning of the end, but there are months still ahead of us and they won’t be simple,” Illa warned yesterday.

The government will be distributing 350,000 doses a week among the country’s regions, which are in charge of their own healthcare systems. The Pfizer vaccine, which is reported to be 95% effective, requires a second dose 21 days after the first, and the recipient will not be immunized until 28 days after the first injection. The immunization program is free and voluntary.

In Spain, the 14-day cumulative number of coronavirus cases per 100,000 inhabitants has once again risen above the 250-mark considered to be extreme risk by the Health Ministry, and is now at 266.