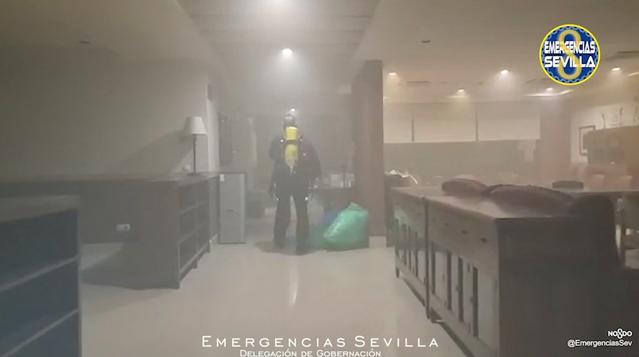 A RESIDENT died and five people were seriously injured when fire swept through a nursing home in Seville on Tuesday night.

The alarm was sounded at around 22.30 and the emergency services received more than a dozen calls about the blaze at the Adorea nursing home in the San Pablo district of the city.

The private residence has 108 apartments spread over four floors and about 90 people were thought to be inside. A woman, aged in her 80s, was pronounced dead at the scene and five elderly residents were rushed to hospital.

It was reported the fire began on the third floor and firefighters had to rescue a number of people trapped by the flames.

People living near the nursing home helped the evacuation, bringing blankets to keep residents warm and help them to the sports centre.

Residents evacuated from the building were taken to a nearby sports hall, where medical teams were able to evaluate their condition; another 13 people suffering more minor injuries were transferred to hospital while others were taken to other residential homes or reunited with families.

The fire was reported extinguished shortly after midnight. At present, the cause of the fire is unknown.