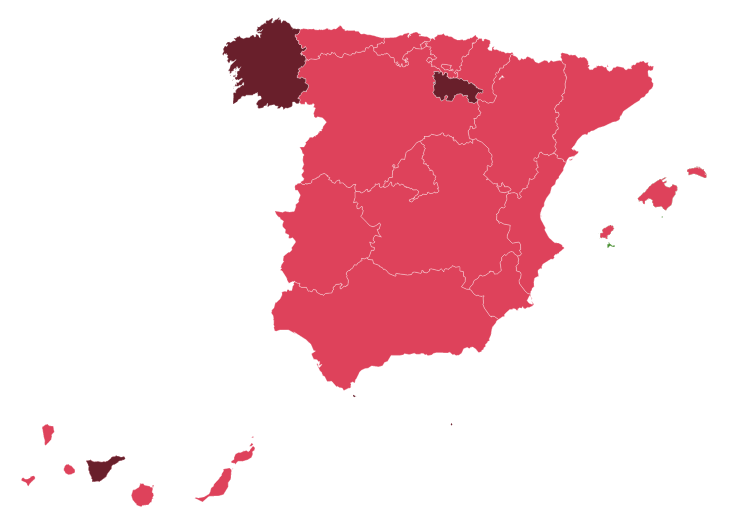 Since the 25th October, Spain has returned to a state of alarm to deal with the coronavirus pandemic in Spain, although differently from the previous one implemented by the Government between March and June. In addition to the measures it allows, each region can establish its own measures, ranging from phase setbacks or different levels of alerts that include, among others, capacity restrictions, business hours and catering and limitations on social gatherings.

All communities have applied restrictions on night mobility or “curfew”. In addition, the regions are responsible for decreeing local or community-level confinement, including limiting the entry and exit of citizens from other territories.

The Andalusian Regional Government has agreed to implement a two-phase phasing-out to increase mobility on Christmas dates, which represents a relaxation of the measures implemented since November. Currently, and at least until the 10th January, mobility between provinces is allowed. Curfew is set between 23:00 and 6:00.

The epidemiological situation has made it necessary to order the perimeter closure of eight municipalities in the Campo de Gibraltar.

As of January 5th, Aragon returns to the level of alert 3 to contain the increase of contagions, the highest phase of health intervention regulated in the regional regulations. It maintains until the 31st January the perimeter confinement of the three provinces and also the region, as well as the curfew between 23.00 and 06.00, and the popular festivities are suspended until the decay of the state of alarm, on the 31st May.

All non-essential establishments must be closed at 20:00, which affects trade industry and the bar and restaurant industry; the maximum capacity for consumption inside establishments shall be 30% and on terraces 50% of the maximum permitted. In establishments, commercial premises and public services, the capacity will be 25%.

Attendance in all secundary classrooms is expected to recover between the 7th and 25th January.

The government of the Principality of Asturias, presided over by the socialist Adrián Barbón, ordered the perimeter confinement of the whole region, since October 28th. Curfews are set from 23:00 and until 6:00 and only meetings of up to six people are allowed.

The Balearic Government has not restricted movements between islands, but has set up a system with five alert levels, ranging from 0, called “new normality” to 4 for very high risk or extreme contagion. Mallorca is on level 4, Formentera, Menorca and Ibiza are on level 3.

Since the 29th December, restrictions have been tightened in Mallorca, where meetings were already limited to six people and curfew was maintained at 22:00 hours also on New Year’s Eve. The bar and restaurant industry, which can only be served on a 75% terrace, will be closed from now on at 18:00 every day-not just on weekends and public holidays. Shopping centres or premises over 700 square metres may not be opened to the public on Saturdays, Sundays or public holidays until at least the 12th January on the island of Mallorca.

Ibiza has been on alert level 3 since the 7th January for the “worsening” of the increase in new cases of COVID-19. In addition to the restrictions foreseen for this level, it is added that the curfew is brought forward to 22:00 hours and the interior of cafes, bars and restaurants is closed.

In the Canary Islands there is a perimeter limitation on the islands, although this will not apply to passengers who undergo a health check. As for the perimeter confinement between islands, Tenerife is. The curfew is between 22:00 and 6:00 hours on all the islands, and gatherings up to six peopleare permited, except in Tenerife, where the maximum is 4 people.

To cope with the increase in cases, Cantabria decided to close the region since October 30th. It also extended the same measure to its municipalities, but mobility between them was allowed from the 12th December. In addition, after a review, the region applies the night curfew from 22:00 hours to 6:00 in the morning. Meetings can be of up to six people.

Cantabria is on alert level three, although the regional government could revise it by applying greater capacity restrictions and limitation of activities involving social interaction.

Castilla-La Mancha imposed the perimeter closure of the region from October 29th after agreeing this measure with Madrid and Castilla y León. In this region the limitation of night mobility is established between 0:00 and 6:00 hours, and a limit of six people has been imposed on meetings, both in public and private areas, unless they are cohabitants.

The only confined municipality is La Solana (Ciudad Real), which will have a curfew between 22:00 and 7:00 hours, in addition bars will be closed.

Since November 5th, all municipalities have restrictions of ‘level 2’, except those that already have them or those of a higher level; the measures are extended every ten days. Among other measures, level 2 limits the indoor capacity of bars and restaurants to 50% without bar service and terraces to 75%. “Level 3” prohibits indoor hospitality activity and terraces are limited to 50%.

Castilla y León maintains the perimeter confinement until May 9th, that is, until the end of the state of alarm. After this measure, announced on January 7th, others such as the curfew -between 22:00 and 6:00 hours-, and the maximum number of participants of social meetings -six people- will be maintained until the same date.

Mobility between provinces is allowed and the hospitality industry was opened in all municipalities, although with different degrees of openness depending on the level of alert in each province. All provinces are on alert level 4, except Ávila and Salamanca.

The Government of Cataluña has decided to establish a municipal confinement from January 7th until January 18th, and to close shopping centers and gyms. Non-essential shops will be closed on weekends and, during the week, those with less than 400 square meters of surface will be able to open.

Restaurants will continue as it has been until now, with timeslots to only serve during lunches and breakfasts, as well as the culture industry -with capacity restrictions in cinemas, theaters and auditoriums at 50% and a maximum of 500 people seated.

The entire region remains confined on the periphery, the curfew is between 22:00 and 06:00 hours, and gatherings with maximum of six people are allowed.

In the Valencian Community, the president of the Generalitat, Ximo Puig, has decreed the perimeter confinement of the region from 12:00 hours on October 30th to January 31st, so that the population will not be able to leave or enter the region, but you can move between municipalities, counties and provinces.

The president of the Generalitat, Ximo Puig, has announced new measures in the face of the evolution of the virus, which include the prolongation of the perimeter closure of the Community, the night curfew is brought forward to 22:00 hours and will last until 06:00 hours.

In addition, the closure of the hospitality industry throughout the Community is decreed at 17:00, smoking is prohibited on the terraces of the establishments and on the tables there may be no more than four people. The permitted capacity in all shops is reduced to 30%, and the maximum number of people at social gatherings will remain at six. Also from the 7th January the gardens and outdoor leisure areas will be closed at 17:00.

Extremadura has decided to apply more restrictive measures in view of the increase in cases during the Christmas holidays. From the 7th January and for at least one week, hospitality and restaurant premises will be closed, non-essential trade and entertainment in localities larger than 5,000 inhabitants with an incidence of more than 500 cases per 100,000 inhabitants in the last 14 days.

The regions borders are closed, the curfew is between 22:00 and 6:00, and only a maximum of six people can gather.

The capacity of commercial premises is limited to 30%, in hospitality the maximum number of people who can be seated at a table will be four and non-regulated sports competitions are suspended. After Christmas, visits to old people’s homes will be prohibited for 28 days from the day after the start of vaccination in each centre.

Galicia has decreed a perimeter closure until the 11th January. It also maintains perimeter confinement in more than 50 municipalities, including five of the seven main cities: A Coruña, Santiago, Ferrol, Pontevedra and Vigo. Social gatherings are limited to four people and curfews apply between 23:00 and 6:00.

In the community as a whole, a plan of restrictions divided into four levels (basic, medium, medium-high and extreme) depending on the epidemiological situation, allows with limitations the functioning of the hospitality industry. In application of these levels, social gatherings are also restricted to a maximum of four or six people, depending on the evolution of the pandemic in the municipality.

Madrid maintains its plan of perimeter confinement by basic health zones, which is currently implemented in a total of 23. The curfew continues between 0.00 and 6.00, and a maximum of six people may be gathered.

The Region of Murcia agreed to close the perimeter of the region and municipal since October 30th. The autonomous confinement will be maintained, for the time being, until the 20th January.

Navarra has opted for the perimeter confinement of its entire territory from October 22nd to January 18th. Thus, the entry and exit is limited, except for work, health or educational reasons. It keeps the curfew between 23:00 and 6:00, and the maximum number of people who can meet is six.

The Basque Country maintains the perimeter confinement of the region, the curfew established is between 22:00 and 6:00 hours and limits social meetings to a maximum of six people.

La Rioja has extended the perimeter confinement of its entire territory -in force from October 23rd- until January 31st. You cannot enter or leave La Rioja except in justified cases, and although you can travel between towns in La Rioja, the authorities recommend not to do so.

From the 7th January, the curfew is brought forward by one hour, from 22:00 to 6:00. Social gatherings of family and friends are limited to a maximum of four people, both in public and private spaces and indoor seating is limited to 50% and 60% outdoors. For sports activities, the capacity will be 30%.

In Ceuta and Melilla there is also perimeter confinement. The curfew is between 23:00 and 6:00 in Ceuta, while in Melilla it has been brought forward to 22:00. In both cities a maximum of four people can be gathered in social and family gatherings.