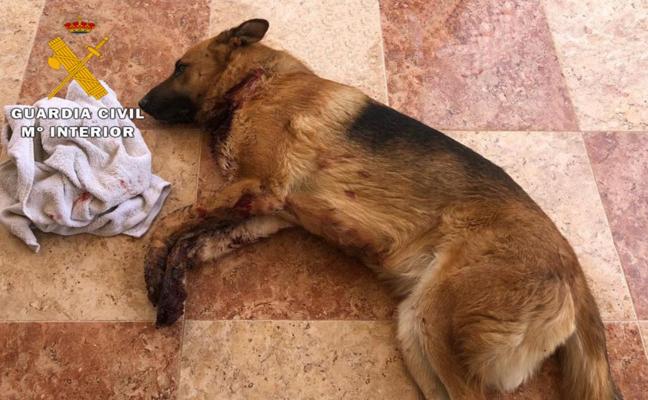 Heartless gangsters stabbed a pet dog in the neck to pressurise a young father to hand over the cash – and settle a long-standing and ‘high-value’ debt.

The Albacete family had been plagued with threatening telephone and social media calls from the gang prior to their home in the town of Caudete, according to the police; all concerning money ‘alleged’ to be owed.

The Guardia Civil released details of the incident after arresting alleged members of the gang, both Swedish nationals aged 37 and 34. A third Swede was held in Stockholm under an international arrest warrant.

And the police said thanks to a quick-thinking neighbour the life of the family pet, a German shepherd, was saved after an emergency operation.

A Guardia Civil spokesman said the two suspects were arrested in the Alicante towns of San Juan and San Miguel de Salinas. “Their arrests made it possible to locate and arrest the third perpetrator of these crimes.”

All three have been charged with extortion and abuse of an animal; all linked to an alleged debt the victim was ‘supposedly contracted to pay’.

The spokesman said the attack was last July, but the crimes were not made public until the suspects were caught following an investigation.

“Faced with the young man’s refusal to pay the alleged debt, they travelled to Caudete and confronted him, demanding payment. They stabbed the dog in the neck,” he said.

“The pet’s life was saved thanks to a neighbour who took him to a veterinary clinic where he was operated on for serious injuries.”