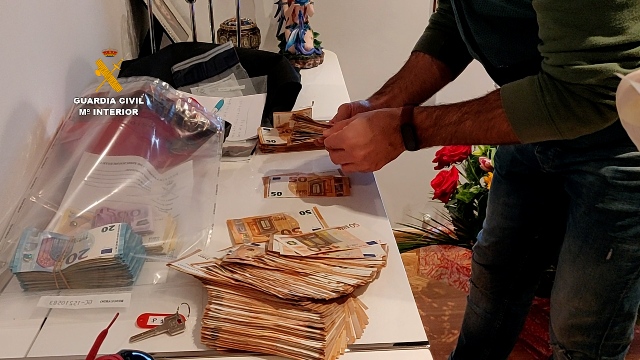 THE scheming leader of an international swindle presented herself as a millionaire and illegitimate daughter of King Carlos I to run a €4 million property racket, say police.

Cut price luxury Spanish property was marketed and sold to unsuspecting clients in Madrid, Barcelona, Tarragona and Alicante – and across Europe, particularly in the Czech Republic and Sweden.

And the ‘princess’ running the illicit operation based in the Alicante town of Guardamar del Segura’, funded a regal lifestyle with the loot.

The Guardia Civil estimate at least 100 victims were sucked into an internet marketing con – the gang searched for genuine properties of various types and put them up for sale as a ‘great opportunity’, offering them at 20% of the true value, but interested parties had to make an immediate reservation, even without seeing the bargain.

Once a victim showed interest, the gang formally reserved the property with the genuine estate agent or promoter, giving them access to real documentation before pulling out.

When victims paid, their purchase never materialised, and contact ended – the scammers disappearing behind a screen of fake identities.

A spokesman for the police said: “This criminal organisation was highly hierarchical. The leader of the group is a 50-year-old Spanish woman, a historic swindler.

“This woman, who suffers from a physical handicap for which she needs to use a wheelchair, posed as the illegitimate daughter of the King Emeritus or General Franco to help gain appreciation and compassion from acquaintances. who in turn unwittingly helped capture victims, whom she told she was the heir to a great fortune.

“She lived a luxury lifestyle and had more than 15 employees working for her who performed all kinds of personal services for her.”

A total of 10 people have been arrested so far and eight searches of their homes in Alicante have seen detectives recover €60,000 in cash and €50,000 in jewellery.

The gang also founded a law firm – and employed real lawyers – as a front for the eight months of the operation named ‘Opportunity 2020’ by police. Officers believe at least €1.5 million was successfully laundered through bank transfers.