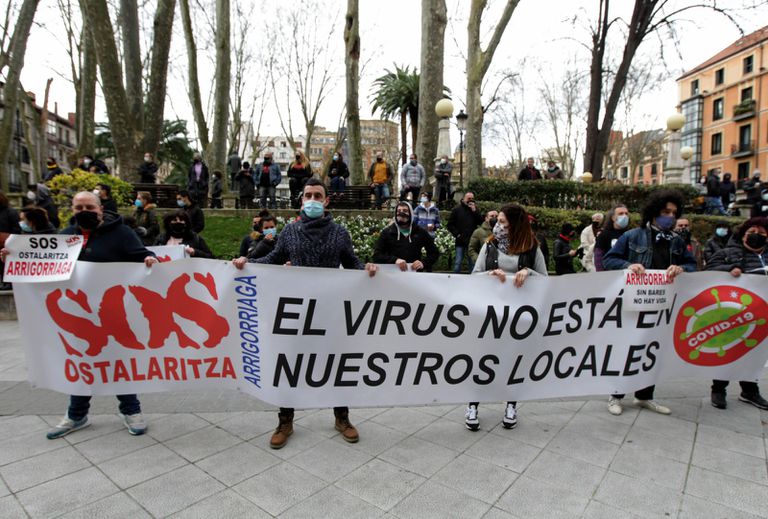 The Higher Court of Justice of the Basque Country (TSJPV) has provisionally accepted the request of the hospitality associations to allow the reopening of the premises of municipalities in the red zone due to the high rate of contagion by COVID-19. This way they can open but following the general restrictions in the Basque Country, with a limitation of 50% of the capacity and only until eight in the afternoon.

An order issued by the Administrative Litigation Chamber of the TSJPV thus responds to the request for precautionary measures requested by the gospitality sector to allow the activity of bars and restaurants in those areas until the court reflects on the merits of the matter.

The Basque hospitality sector had gathered in front of the court to defend their activity. Across Spain there have been rallies in front of the headquarters of the Ministry of Finance to demand “direct aid now” and to protest for “paying for the broken dishes” of the pandemic.

Hospitality is not the cause of the third wave

The Court considers that, with the limitations of capacity and with sanitary measures such as the use of masks, the hospitality industry “does not appear to be an element of a certain and serious risk to public health” and this sector has not been found to be responsible for the increase in the spread of the virus after Christmas.

In addition, remember that there was a “relaxation” of the measures on the Christmas dates and epidemiologists attribute 80% of the current contagions to family and friends meetings.

The Catering Associations of Bizkaia, Gipuzkoa and Álava requested in an appeal on February 4 the “elimination” of the closure in the localities with a Cumulative Incidence Rate of positive cases by Covid-19 in the last 14 days equal to or greater than 500 per 100,000 inhabitants.

The High Court recalls that the reopening is not “unconditional” because the hospitality establishments will have to maintain other time restrictions, capacity, in addition to guaranteeing the distance of meter and a half between people sitting at different tables, the grouping of customers per table with a maximum number of four customers, and the prohibition of consumption in bar or standing.

They take into account that “serious economic damage is generated” for bars and restaurants. ” It is notorious and very difficult to repair the reality of the definitive closure of a not insignificant number of businesses, so that a possible future compensation, if produced, would not restore the current factual situation, “he says.

The spokesman for the Basque Government, Bingen Zupiria, said that the TSJPV’s decision shows that the Basque Country lacks “legal certainty” to take the necessary measures against the pandemic and believes that the debate on “real capacity” is reopened that the autonomous authorities have the power to adopt these measures.

In a statement, the regional government has indicated that it “respects, but does not share and cannot understand” the resolution. They point out that a rate above 500 is the indicator of “a very serious and alarming situation” requiring exceptional measures “being taken in the middle of the world”. ” We arrived at the adoption of these measures because of the accumulated experience of the previous waves, “they say.

In addition, they add that “it is particularly serious for a court to assess issues such as evolution or epidemiological risk, which are constantly evaluated by the LAVI technical commission and the professionals of the health department”.

For her part, the Minister of Health, Carolina Darias, has accepted the decision of the courts and defends that the adoption of the state of alarm until May is what allows the autonomous authorities to take their measures with guarantees as “delegated authorities”.