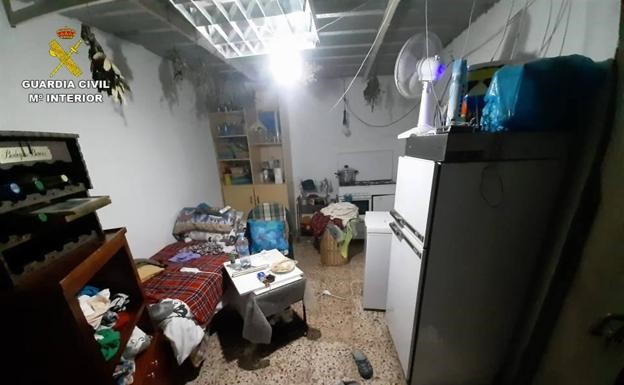 A MARRIED couple have been arrested for keeping a woman prisoner in a garage for over 12 months while making her work as a servant without pay.

The Algerian 50-year-old husband and his wife, 44, have been charged with human trafficking after holding their victim against her will in ‘inhumane’ conditions after luring her to Spain with promises of official papers and a work contract.

The Guardia Civil said the victim managed to contact a family member using the couple’s internet and police launched Operation Zenata to rescue her – finding her malnourished having lost 20kg during her ordeal.

As a result of the information and testimony regarding the ‘SOS’ call, officers were able to locate the home of the suspect in Agost, near Alicante, and free the woman, also of Algerian nationality.

A police spokesman said the woman believed she would be able to start a new life in Spain but once they took her passport away after she arrived and forced her to live in the garage attached to their home.

“The victim was in an obvious state of malnutrition; the said after suffering a series of fainting spells she was denied the opportunity to see a doctor and lost 20kg during her months of confinement,” he said.

“The couple had put a bed and improvised a toilet in the garage where she lived in inhumane conditions. The room did not have any ventilation and exposed electrical wiring criss-crossed the room and hung from the ceiling.

“She was forced to work seven days a week, kept busy with different household chores. A promised salary never materialised.”

The couple faces charges of human trafficking for the purposes of exploitation; illegal detention; and breaching the rights of foreign citizens.