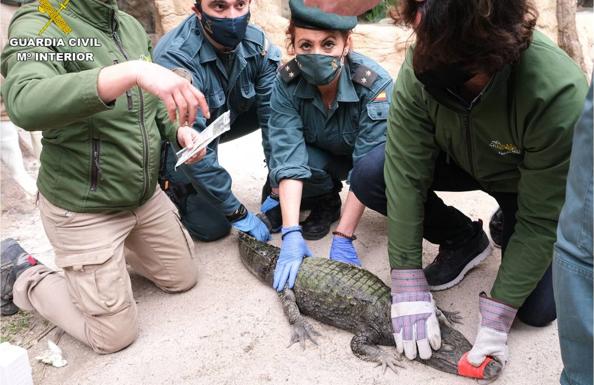 AN alligator rescued from an Alicante farm is starting a new life in a zoo after being touted for sale on the internet.

Officers of the Guardia Civil’s specialised animal welfare unit and vets traced the 1.6 metre reptile to Sax after adverts were spotted offering it for sale for €2,000.

The police carried out an inspection of the facilities used to house the alligator, caiman crocodilus, and a Harris eagle.

The owner had documentation for the bird of prey but was unable to show he was the legitimate owner of the alligator or prove the origin of either animal – not did he have insurance to cover the possession of potentially dangerous animals.

Police also found the facilities to keep the alligator were ‘inadequate’ and it was transferred to the Rio Safari Zoo in Elche; where it will reside in more comfortable surroundings and have room to grow.

A formal complaint has been made against the owner; the eagle will remain in his possession while it is processed; it was decided the bird’s health was not at risk.