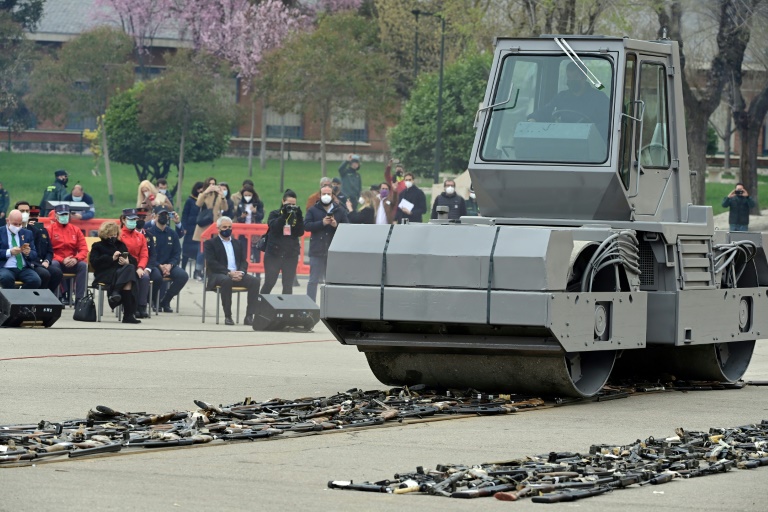 Watched by Prime Minister Pedro Sanchez, representatives of terror victim
associations and law enforcement agencies, a steamroller slowly flattened three rows of arms – more than 1,000 guns and other weapons seized over the years.

At a Guardia Civil barracks in the south of the capital, the premier said: “We have just witnessed an act of great symbolism in that long fight against terrorism that was so painful for our country.

“We will not be able to recover the lives that were lost, nor will be able to erase the dark past as we have now destroyed these weapons; but we can fight against forgetfulness and repair the pain and honour.”

ETA ended its struggle in 2018 and 90% of the almost 1,400 arms put beyond use were seized between 1977 and 2005; the remainder belonged to GRAPO, another armed group that is no longer active.

The flattened weapon will be melted down and become part of a monument to symbolise the end of ETA, which was accused of the deaths of more than 850 people during a four-decade struggle for an independent Basque state in northern Spain and southern France.

The head of the Memorial Centre for Victims of Terrorism in Spain’s Basque Country, Florencio Dominguez Iribarren said: “Behind these pistols, rifles and machine guns, there are many tragedies, many victims, which we must remember.”

However, some associations boycotted the event and the main opposition party, the conservatives Partido Popular dismissed the event as “propaganda”.

The PP has been angered by the support for Sanchez’s PSOE party in the minority Spanish government from Basque nationalist party Bildu – which contains former ETA members – and the transfer of jailed members of the outlawed terror group to prisons closer to the region.