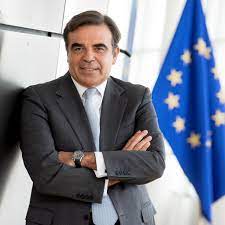 VICE-PRESIDENT of the European Commission Margaritis Schinas believes a health certificate – the so-called Covid passport – will be in place to allow cross-border travel this summer.

He believes the United Kingdom will have a similar document to allow tourists into Spain and other European destinations – British people are allowed to travel abroad from May 17 under the current UK government’s roadmap back to normality.

Schinas was speaking at a Madrid press conference during a visit to the World Tourism Organisation and underlined hopes to have 70% of Europeans vaccinated in the summer with the green digital health certificate allowing travel “so as not to miss the European summer”.

He said the aim was for a “orderly and safe reopening” and hoped it would be ready for the world-famous international tourism fair Fitur, which runs in the Spanish capital from May 19 to 23.

The Covid passport identifies people who have been vaccinated, tested negative through a PCR test, or have recently recovered from the disease to allow travel.

Europe believes the UK will introduce a similar tourism passport and coordinated with the EU document to allow safe travel. Schinas added: “The EU will recognise certificates from third countries that offer the same type of information and reliability as ours”

He said Europe could not return to normality alone as Covid was a global pandemic and international agreements were essential.