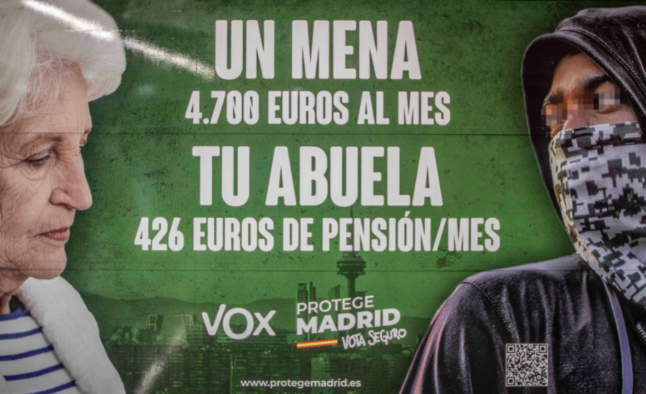 The billboard posters attack spending on child migrants and are part of the party’s drive for votes in the upcoming Madrid regional elections on May 4.

Other political parties, including the governing socialists PSOE and junior partner Unidas Podemos, are taking legal action over what is described as spreading ‘hatred’.

The Vox poster message uses the term ‘mena’ – the Spanish acronym for an
unaccompanied foreign migrant minor – and frequently used in a derogatory way to describe children and teenagers who arrive in Spain without their families.

It reads: “€4,700 a month for a mena; €426 a month for your grandmother’s
pension.” The poster also features images of an elderly woman and a young man wearing a bandana over his face. The words “protect Madrid” are also included in smaller print.

Government ministers Irene Montero and Ione Belarra, both of Podemos, have filed a complaint with the public prosecution service – they are joined by the party’s secretary general Pablo Iglesias who is standing in the election.

PSOE has also complained to a judge and both parties have demanded election authorities take the advertising down.

The Spanish parliament, the Congress of Deputies, was also the scene of heated debate after Vox spokesperson Iván Espinosa de los Monteros said there was no cash for a lot of things in Spain but there was enough to “maintain menas and illegal immigrants across Spain.”

He was accused by Deputy Prime Minister Carmen Calvo of using advertising to attack “boys and girls” who were “fleeing terrible situations” without their families and who fell victim to serious criminals during their plight. “That’s called inhumanity, hatred”.