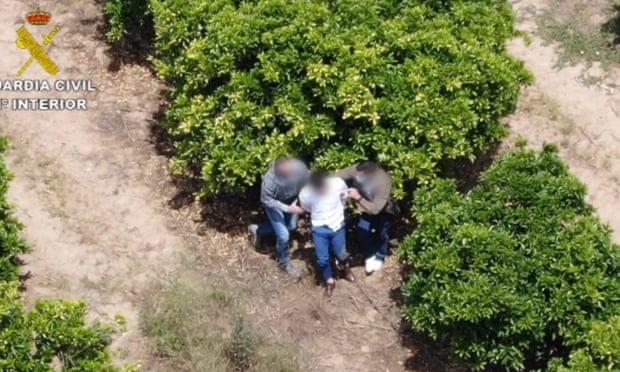 SPANISH police arrested a ‘most-wanted’ suspect 10 months after he went on the run at a family party to celebrate a first holy communion.

Alleged to be part of a major drug trafficking gang, the “extremely slippery” man came out of hiding to attend the celebration at a restaurant in La Algaba, near Seville.

First communion celebrations are an important date in the Spanish family calendar and when the Guardia Civil hear a party was being thrown to mark the occasion, they decided there was a chance he would show up.

In a statement, the police said the man, known only as DJCM, went on the run last July when officers broke up a major underworld organisation – they arrested 30 people and seized more than five tonnes of hashish, 2kg of cocaine, dozens of cars, and Kalashnikov assault rifle and more than €100,000 in cash.

According to the police, DJCM was a trusted quartermaster and responsible for the gang’s logistics. “Since then, this extremely slippery customer had been living between various Andalusian provinces in a bid to avoid arrest.”

Officers surrounded the restaurant venue and covered all escape routes. “Wearing plain clothes so as not to get in the way of the family celebration, officers moved in to make the arrest.

“But as soon as he saw them approach, he scaled a high fence and fled into the countryside.”

Using a drone to follow the fugitive, police pursued the suspect on foot and arrested him in an orchard.