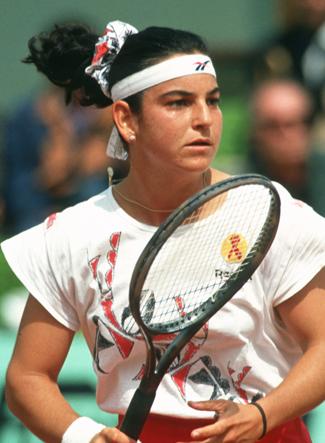 FORMER Spanish tennis star Arantxa Sánchez Vicario is accused of a massive scam on the Banque de Luxembourg – and faces a four-year jail sentence and a claim for €6.1 million in compensation.

The 49-year-old and ex-husband Josep Santacana face charges related to hiding assets in a bid to avoid paying the debt to the bank – the businessman alleged to have concocted a plan to empty accounts and sell off assets with the help of others said to have been frontmen.

The player, who retired in 2002, made headlines when she won the Roland Garros French Open in 1989 at the age of 17, beating Steffi Graf in the final. She went on to bank €17 million in prize money after winning 14 Grand Slam titles and four Olympic medals.

Sánchez Vicario also published a successful memoir – claiming how she was a victim of her parents’ manipulation – and later was said to have earned a fortune as a tennis circuit commentator and giving interviews to the press.

Her financial woes started with money owed to the tax authorities and fines for non-payment. The bank, which saw her as a loyal customer, guaranteed the money against a programme of scheduled repayments. However, instead, the debt soared and the Banque de Luxembourg turned to the courts.

Prosecutors in her home city of Barcelona say the bank had spent years chasing the debt and accepted the former star had “followed her ex-husband’s instructions.”