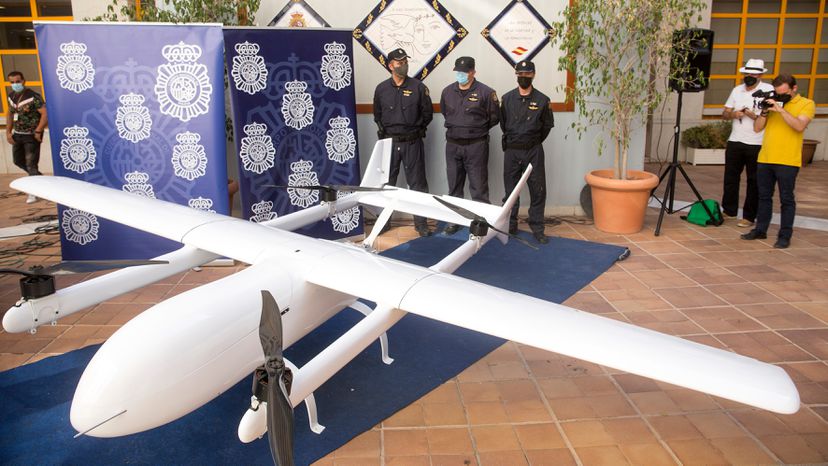 POLICE have seized a giant drone a drugs gang used to fly illicit narcotics into Spain from Morocco – the Chinese built machine worth up to €150,000 depending on its electronic kit.

With a wingspan of 4.5 metres and capable of carrying 150kg of cargo, it was capable of flying for up to seven hors at a time, flying at a speed of up to 170km/h.

The flying machine was seized during a raid at a home in Almáchar, a small town in the southern province of Málaga in an operation to catch a French drugs gang looking to establish a presence on the south coast.

A suspect was arrested at the address and three more people were held in France.

In the clampdown, police also seized 30kg of marijuana and 55kg of hashish – but detectives say the gang used the drone for the most profitable smuggling cargo, cocaine.

They said the isolated house was used as a warehouse and its location meant the drone could operate unnoticed by neighbours.

Last year police located a nine-metre-long semi-submersible submarine worth an estimated €1 million belonging to traffickers which could carry tons of drugs at a time.

They said they had to keep up with the innovation of criminals and said while other gangs used drones before “this is the biggest one ever found in Spain”.

The drone had five motors; four were electric allowing it to take off and land vertically, the fifth a two-stroke combustible engine for normal horizontal flight.

Capable of flying at 7,000 feet, it would journey at a lower altitude to save fuel and avoid detection.

The police said the size of the aircraft meant it posed a considerable danger to other air traffic, including passenger planes.