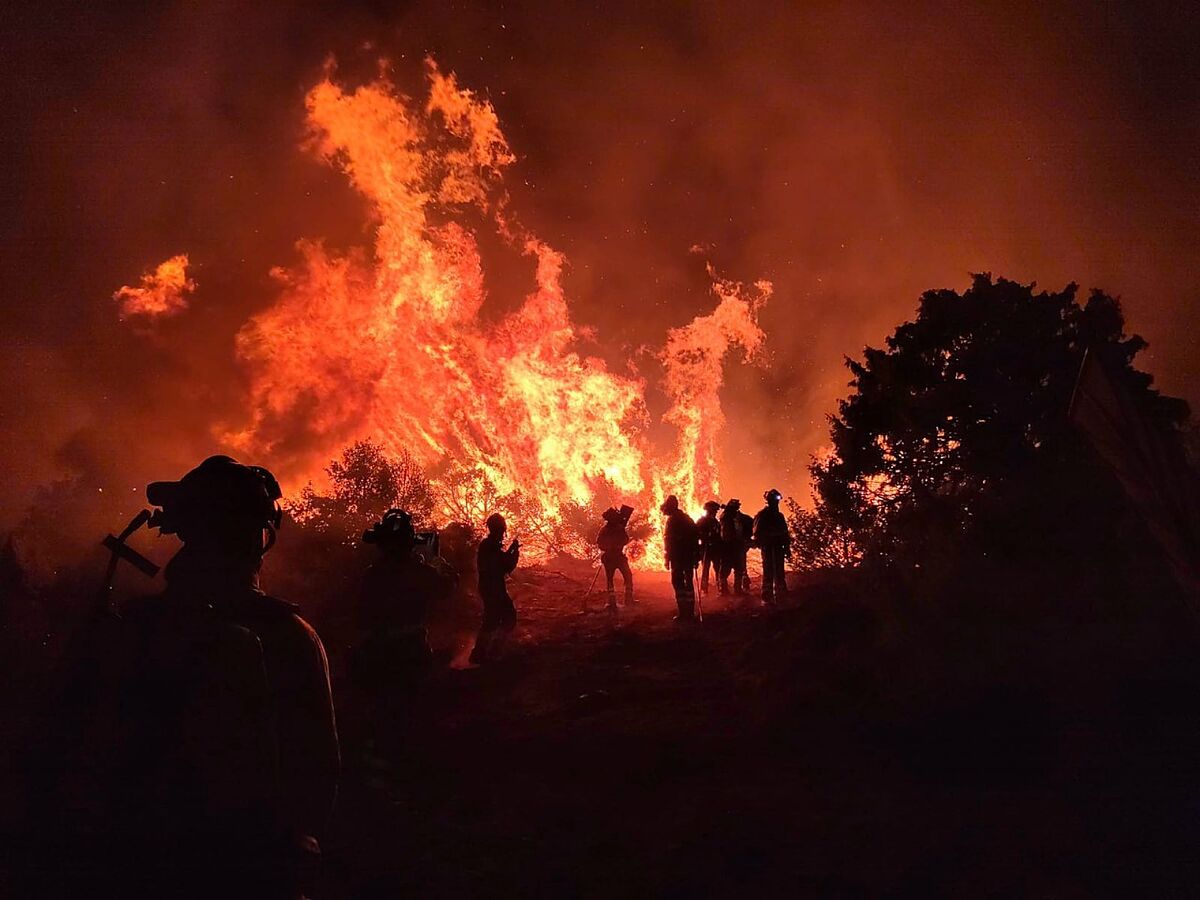 Catstilla y Leon firefighters attack the fire with all possible means. What started as a forest fire has grown overnight to endanger the residents of four villages that have had to be evacuated.

The province of Ávila is suffering from severe fires. The UME has mobilized another 191 soldiers and 75 means to try to put down the fires that were declared on Saturday in the municipalities of Navalacruz and Cepeda de la Mora and La Parra.

The fires have forced the Level 2 of danger to be activated and several hundred residents have had to be evacuated during the night. In fact, this morning another 250 residents of the municipality of Riofrío had to be evacuated. This evacuation is in addition to those of the towns of Villaviciosa, Robledillo and Palacios de Sotalvo. In total, around 1,000 people have had to leave their homes.

Saturday night has been very hard, as the mayor of the municipality of Solosancho has expressed in tears and has described the situation of “panic, fear and anguish”. Farmers have also had to keep their animals safe.

During the early morning hours, work was carried out with 148 military personnel and 70 means, coordinated from the BIEM V command post in León. In addition, more reinforcements have been added and another intervention section of BIEM V has been incorporated into the extinguishing work in the Cepeda de la Mora fire, which adds 102 soldiers and 32 means in this fire.

The Community of Madrid has also sent several Firefighters and Forest Brigades to fight the flames, as well as Extremadura and Castilla-La Mancha.

Two roads remain cut off from traffic and the source of the fire appears to be a breakdown in a vehicle that caused it to burn on Saturday afternoon. In total, it is estimated that more than 10,000 hectares of scrubland, pasture and wooded land have been burned within a 40-kilometre perimeter.

The main head of the fire is located to the east-northwest, but the evolution that the flames may have on the south side worries, since the fire is uncontrolled and if this continues, it could proceed to the evacuation of more towns.

Another fire in Ávila

The situation in Ávila remains complicated. In the town of El Raso, UME is also working in this town and several houses have already had to be evacuated. Although the fire is considered stabilized, heat and gusts of wind can rekindle the flames. It’s being investigated if the fire was arson, and neighbors report they’ve been without electricity since last night.

An estimated 300 hectares have been burned. It is expected that in the next few hours the danger level will be lowered from 2 to 1, which would mean that the homes are no longer in danger.

In Batres, Madrid, a fire broke out yesterday afternoon. It looks like a pasture area, but it’s worrying because the flames have spread quickly. In addition, two houses have been burned and 30 residents of this town, 45 kilometers from the capital, have been evacuated. The strong wind is pushing the fire towards the municipality of Serranillo. All roads have been cut.

Initially, troops from the Community of Madrid were deployed and Level 1 was decreed, but later they had to ask for reinforcements from state seaplanes and helicopters.

Another fire in the town of Azuébar, Castellón, also worries the authorities. The flames have already burned around 500 hectares and throughout the night the troops have been working to contain them. The first moments were very complicated as the fire originated in a wild area and generated a lot of smoke. The troops are working with temperatures above 40 degrees and the evolution will depend on the next few hours.

At night, the weather conditions have improved and that has allowed to perimeter the fire and is already on the way to stabilization..

In addition, the 300 people in the municipality who have had to be evacuated have already been able to return to their homes. According to those responsible for the operation, the focus located in the southern part, where the municipality is located, “generates less danger”. The source may be in a thunderstorm.