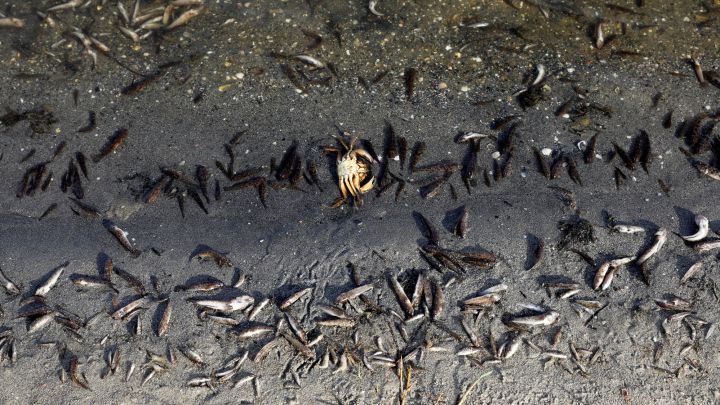 The Mar Menor ecosystem is on the edge because of pollution and nitrogen or phosphorus discharges. For the eighth consecutive day thousands of dead fish reappear in the salt lagoon.

This Monday the remains of animals have been found in the north of La Manga, near the canal of La Veneziola, in the municipality of San Javier. However, most mortality is concentrated in the south and south-east of the natural enclave.

Ramón Pagán, head of the ‘Pact for the Lesser Sea’ platform, warns that the problem of massive fish deaths facing the Murcia coast is something that “has been happening for many years. In 2016, the episode of the green soup occurred, where 85% of the entire underwater prairie died, and in 2019 the highest mortality of fish at the international level was recorded caused by that same eutrophication process. And now in 2021 it is happening again”.

The cause of this situation is the excess of nutrients from the Cartagena field. “In particular we are talking about nitrates, chemical fertilizers that are being used intensively in agriculture, which reaches the Mar Menor basin every day”.

According to their data, 5 tons of nitrate enter daily, which results in the anoxia and death of the marine fauna of Murcia. In this sense, Pagán insists, “although it seems to be a lie, nothing has been done to solve and correct the problems”.