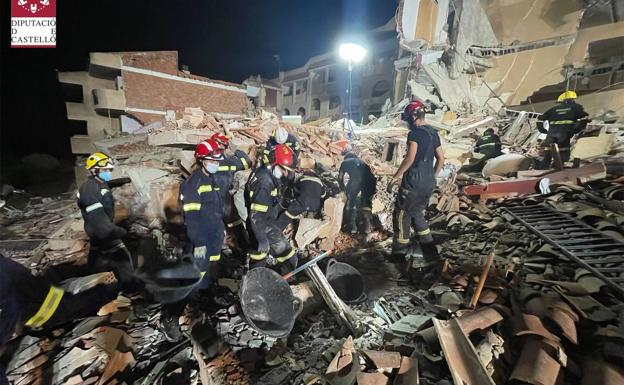 The building that collapsed on Wednesday afternoon in Peñíscola, Castellón, has trapped at least four people and affected around 20 homes.

The rescue teams have located the lifeless body of a minor who was under the rubble according to the emergency service of the Valencian Community on Twitter.

The search has been carried out throughout the night and around 07:43 the deceased minor was located, who was about 15 years old.

Work continues to locate a woman trapped under the rubble, from where they were able to bring out alive a conscious young man who had been trapped after the collapse.

The three missing people belong to the same family unit. The mother is beig searched for, for the moment her stepson (the son of her partner) has appeared deceased, the minor of approximately 15 years.

They also found alive the son of the woman, a young man of 26 years, conscious, but had to be transferred with wounds to the hospital where he is admitted to the ICU of the Vinaròs Hospital, in stable situation.

Martínez regretted that the collapse occurred in the middle of August, “when the coastal town is full of tourists,” he said. Although several residents of the area and witnesses of the collapse claim that the majority of inhabitants of the building were outside, on the beach or walking, which has prevented a major tragedy.

Many of those neighbors, the mayor explained, “have initially helped in the rescue efforts and have coordinated in a WhatsApp group” to share information with the authorities, he said.

The incident occurred around 20:00 hours due to causes under investigation. According to reports from the Castellón Fire Brigade on the site, five firefighters from the Rescue Units (URS) have been mobilized so far supported by the Canine Unit of Civil Protection of the Council of Castellón and the unit of Machinery and Logistics.

At the moment, according to Martinez, “the causes of the accident are unknown. Absolutely nothing is yet known”.

The urbanization where the collapse has occurred is very extensive and is located next to the Serra d’Irta. It is an area of second residences and holiday apartments that right now, in the middle of August, have a large number of more neighbors.