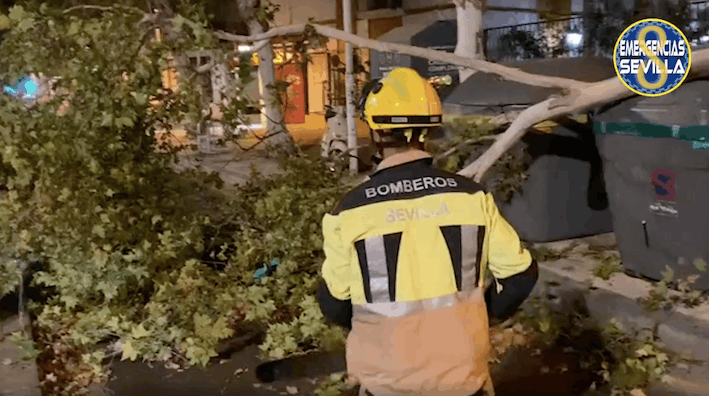 The strong gusts of wind unleashed this morning in Seville have caused numerous material damage to the urban furniture. The air, which has suddenly risen in what is known in meteorology as a “thermal burst”, has thrown out cornices and scaffolding and the emergency services have dealt with half a hundred incidents.

The wind has knocked down branches of trees, which in their fall have caused damage to cars and streets. This meteorological phenomenon comes days after the DANA, which caused damage in several regions of Spain, ended.

The bad weather, in any case, does not end up leaving the peninsula. As on Saturday the Balearic Islands were hit by strong gusts of wind and rain, and last night in Seville.

For the rest of the day, however, the forecast is more flattering, although there will still be rains. The formation of an Atlantic storm on the west side of the peninsula will leave likely occasional squalls and isolated storms in the afternoon in the Cantabrian Mountains, Central and Iberian systems, Pyrenees and Southeast mountain ranges and almost generalized rising temperatures, as reported by the State Meteorological Agency (Aemet).

Dry storms may be recorded in other areas. At the last minute, due to the approach of the associated front, rains and squalls with storm in the west of Galicia are expected, without ruling out that they are locally strong.

In the Mediterranean area there will be a predominance of cloudy skies or with high cloud intervals, although some isolated squalls in Mallorca are not ruled out. In the Canary Islands the sky will be cloudy or clear.

There will be mists, low clouds and possible morning fog banks in the Strait, prelittoral of Catalonia and Mediterranean rivers, with possibility of calima in the south and east peninsular, Melilla and east of the Canary Islands.