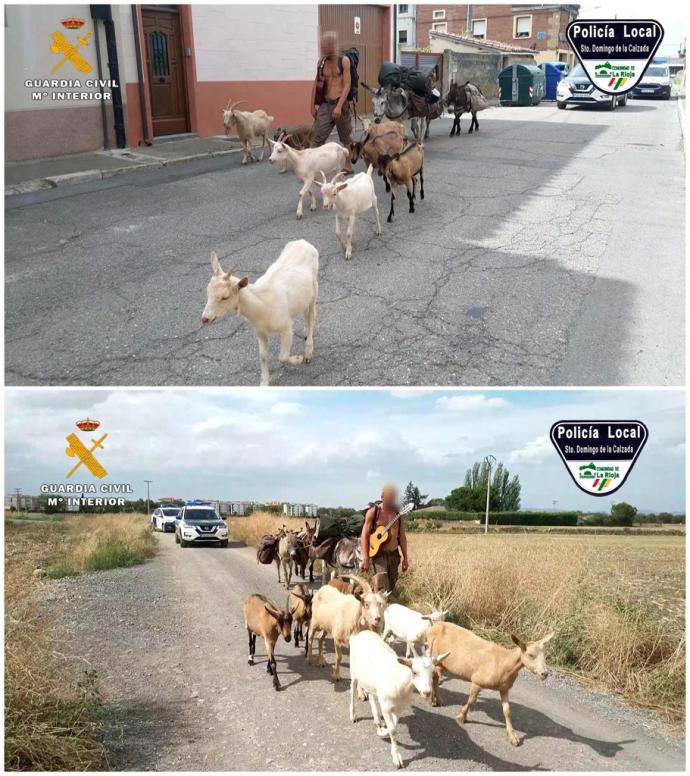 The Guardia Civil and the Local Police of Santo Domingo de La Calzada, La Rioja, identified a 33-year-old French citizen. The young man was on the Camino de Santiago accompanied by 11 animals: 7 goats (2 females and 5 males), 3 donkeys (2 females and 1 male) and a dog. The problem is that none of them had the sanitary guides of circulation, microchips, crotales or ruminal bolus.

The lack of documentation, which was verified ‘in situ’, has caused agents of the Seprona (Nature Protection Service) of the Guardia Civil to alert the Ministry of Livestock of La Rioja. As a result, all the animals were moved to an enclosed and isolated private enclosure. After that, the veterinarians of the Council recognized the goats, donkeys and the dog.

They gave him 48 hours to vaccinate them and while, they left the bullring animals of Santo Domingo de la Calzada. But the story has taken a turn. The pilgrim, named Pierre, has fled with his animals and now the Guardia Civil is looking for him.

Pierre, a French citizen, had begun the Camino de Santiago in the French city of Florac. It has been after about 700 kilometers traveled when he encountered the problems of the Guardia Civil. It was a neighbor from La Rioja who reproached him for the presence of animals in a village fountain. About the animals, he states that “they are my heart, my family”. It also justifies the lack of documentation in which “papers cost a lot of money and I do not have it”.