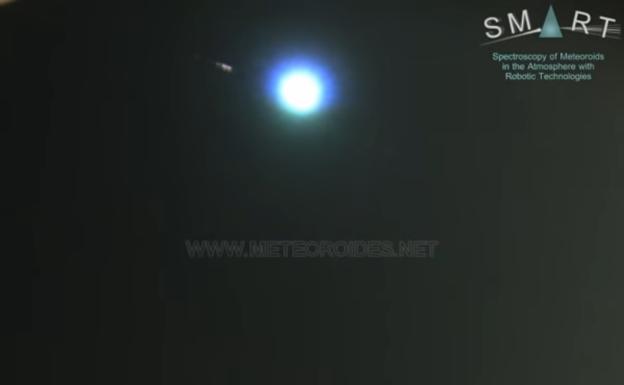 The detectors of the SMART project, of the Astrophysics Institute of Andalusia (IAA-CSIC), from the observatories of Calar Alto (Almería), Sierra Nevada and La Sagra (Granada), Seville and La Hita (Toledo) have detected the fall of a meteorite in the province of Badajoz. This was explained by José María Madiedo, head of the SMART Project.

The fireball was registered last Wednesday around 22:55. Detectors picked up how a rock from an asteroid hit the atmosphere. It had a speed of about 76,000 kilometers/hour when it hit southern Spain. Because of this enormous speed it made it incandescent.

A fireball formed, which started over the south of the province of Badajoz and crossed the night sky. Thanks to its luminosity, it could be seen from more than 600 kilometers away. It looked like a full moon. It was especially beautiful looking at the skies of Seville, Huelva and Extremadura.

For now, as José María Madiedo indicates, it is not possible to know the exact location of the impact, its size and characteristics. However, preliminary analysis indicates that the rock was not completely destroyed in the atmosphere, but that a small part of it would have survived.

A couple sues their son for not giving them a grandchild: “He ...