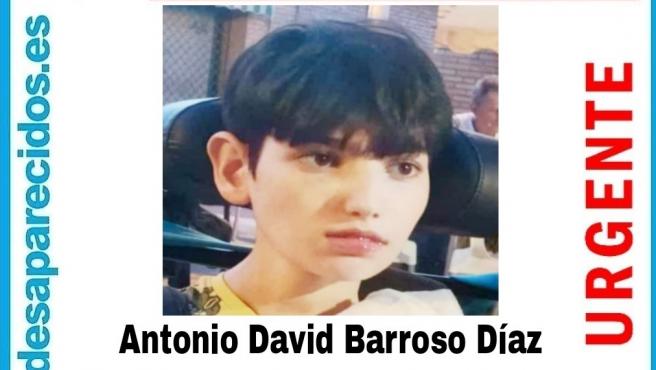 Antonio David Barroso Diaz, the missing child of 15, was last seen on Sunday 12 September night in a hotel in Talavera de la Reina (Toledo) with his mother Macarena, from which they left before 7:00 hours, without the receptionist arriving.

The case revolves around a marriage of Morón de la Frontera (Seville) with two children, a young woman of 18 years and the now missing 15, who suffers from sensory disability and reduced mobility. The parents would have separated and the wife would have custody of the two children. According to the family and the police report, the woman suffers from bipolar disorder and schizophrenia. In addition, they indicate that she has gone several days without taking the medication.

The matter was uncovered when the minor’s mother stopped her car on Monday after running out of gas at kilometer 130 of the A-1, in the province of Segovia. The operator of the tow truck who arrived at the place checked the condition in which the woman was, so he called the Guardia Civil. The officers found her “disoriented” and made “unconnected” statements to the officials. The woman is currently being admitted to a psychiatric unit in a hospital in Segovia.

After contacting the family, the officers asked the woman about her son’s whereabouts, as he was not with her. However, she did have the adapted chair in her car, some of the minor’s clothes and belongings. After questioning, the mother claimed that she had killed her son.

Before the woman’s story, the father went to the police station of the National Police of Morón to file a complaint about the disappearance of the boy. For their part, the family does not believe that she killed their son because they claim that it was “her center of life”. National police officers from Morón visited the woman’s house and found that she had disposed of her belongings and had left the town of Seville on Sunday afternoon, taking the boy with her.

On the other hand, the police found this Thursday the woman’s cell phone in a container in Morón. According to police sources, the mobile phone was thrown into a container on a street very close to the child’s father’s house before the mother left Morón. The device has been found with the screen broken and now the police will analyze the information it may contain.

After confessing that she had killed her son, the woman changed her story and stated that “he had died and dumped his body in a container in Madrid”.

The woman’s house is sealed after a second search, and the Morón Magistrate’s Court of First Instance and the Magistrate’s Court have declared the case confidential. For their part, the researchers shuffle several hypotheses and search in different containers in the area of Xanadu in Arroyomolinos (Madrid) in case the mother’s version were true.

According to police sources, the priority of the investigations is to locate the boy, so investigations are being carried out in Talavera de la Reina, Segovia and Andalusia. Some neighbors say they had seen the mother throw some of the furniture and belongings from inside the house.