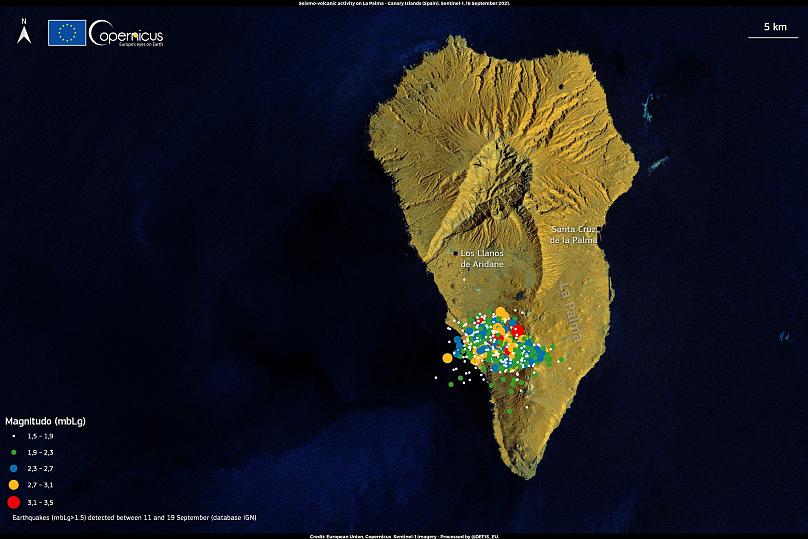 One of the main concerns of the experts is the possibility that acid rain or toxic clouds will form when the lava from the Cumbre Vieja volcano, on the island of La Palma, reaches the sea. The Canary Islands Special Emergency Plan for Volcanic Risk (Pevolca) intensify the device in the face of foreseeable explosions and emissions of harmful gases.

A meteorologist from Spain, explains that the possibility of a toxic cloud forming exists, although it seems remote. “What will form is a cloud of water vapor that, if very dense, will make air traffic difficult,” he says.

On the possibility of acid rain in populated areas, the State Meteorological Agency (AEMET) has anounced this Tuesday, “unlikely at this time” that something like this should occur as a consequence of the toxic gases emanating from the volcanic eruption that began on Sunday on the island of La Palma.

The lava, on its way to the sea, has totally or partially destroyed around 200 houses, which has forced 6,000 residents (many of whom have lost everything) to be evacuated.

Currently, the island is blowing northeast winds at low levels; the skies are cloudy in the north and in the east and there is a probability of weak rains and according to Meteored and the Vulcanological Institute of the Canary Islands (INVOLCÁN) The eruption expels every day between 6,000 and 9,000 tons of sulfur dioxide.

The lava released by the volcanic eruption that began on Sunday on the island of La Palma in the Canary Islands covers 106 hectares of land. This calculation was made by the European Union’s Copernicus satellite emergency programme, which this morning published an image taken by the Sentinel 2 satellite and which reflects the situation at 19:50 yesterday.