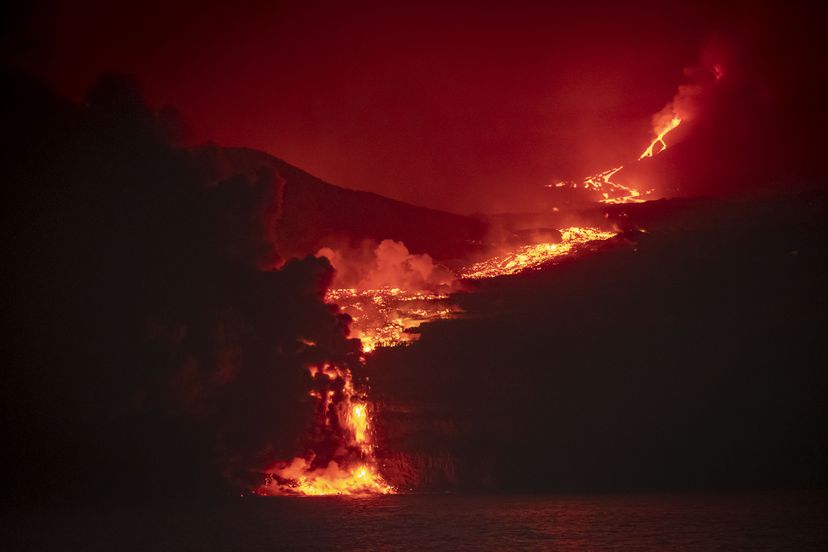 Lava from the volcano on the Canary Island of La Palma reached the sea last night at around 11pm local time, at the area known as Los Guirres beach, also known as Playa Nueva (New Beach).

The contact with the seawater created a plume of black smoke, which drifted onto land due to the winds that blow at night from the sea toward the island. The water has little depth in that area, meaning that a new platform was likely to be created relatively quickly.

According to the Spanish Institute of Oceanography, the magmatic material from the volcanic eruption of Cumbre Vieja (La Palma) has formed a kind of pyramid more than 50 meters high.

The arrival of the lava in the ocean is something that has been worrying the authorities since the eruption began on Sunday, September 19th, given that the molten rock will react with the saltwater to create toxic clouds. The only person who died during the eruption of the Teneguía volcano on the island in 1971 was killed by the inhalation of these gases. For this reason, the work of the Civil Protection force was stepped up yesterday, as the “explosions and the emission of harmful gases” could be seen, according to the Pevolca crisis committee.

The path the lava has taken to the sea, a destructive journey lasting 10 days and leaving around 50 million cubic meters of lava in its wake, has been erratic and unpredictable. After several days of deceleration, the flow reactivated on Sunday, its speed picking up. This situation prompted the emergency confinement of four residential areas due to the danger of toxic gases. These gases are now the main concern of the authorities, who have set an exclusion zone of two nautical miles around the area.

The contact of lava and seawater triggers a chemical reaction, mainly of chlorine, which can irritate the skin, eyes and respiratory system. According to the US Geological Survey, there are four main dangers associated with lava entering the ocean: “The sudden collapse of new land and adjacent sea cliffs into the ocean, explosions triggered by the collapse, waves of scalding hot water washing onshore and a steam plume that rains hydrochloric acid and tiny volcanic glass particles downwind from the entry point.”

There is also the possibility that the sea will turn turquoise green, forming an enormous stain that is visible from space. This is what happened in Hawaii in 2018 following a volcanic eruption.