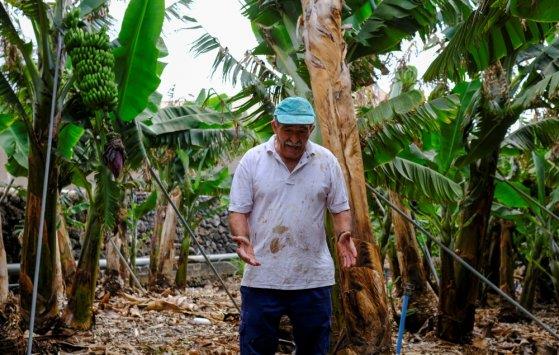 Banana plantations have been affected by lava from the La Palma volcano. It has already destroyed many infrastructures and farmers are afraid of losing their plantations altogether.

The irrigation channels of the banana trees have been destroyed by the flow of lava. Desalination plants, which are common in other growing areas in the Canary Islands, could be the solution for maintaining activity on these plantations. Restoring irrigation is one of the priorities so that farmers do not lose their plantations because of lack of water.

The lava from the La Palma volcano has destroyed the infrastructures with which it has crossed. Guaranteeing water supplies is now a major concern. Water supply and irrigation problems are being noted in the municipalities of El Paso and El Llano and in the areas further south of the lava flow, such as Puerto de Naos or El Remo.

At the moment, there are no incidents of power cuts or telecommunications. About 6,000 people have been evacuated since the eruption of the La Palma volcano began. There was only one supply of water under the lava that was still working, the pipe miracle. However, it has finally collapsed and the worst is that it affects the most fertile area of the island of La Palma.

There are 600 hectares of bananas in danger.” These plants drink a lot of water every day and can not be more than 3 weeks to a month without water, because we not only lose the harvest, we already know that we have lost it, but we lose the plant”, commented one of the farmers who has been affected by the La Palma volcano.

A solution is needed. Drilling into the lava to repair the pipe is very complicated. Joining the saved pipes into a water ring is slow. The quickest way is to bring portable desalination plants. “They will soon arrive on our island. We are working with the corresponding pipelines to be able to bring that water to those places that need it”.

Boats with water are expected to arrive in about a fortnight, but farmers believe that since the eruption of the La Palma volcano, urgent measures should have been activated.” They are dilating in time… If we go beyond the month, next year’s production will also kill it,” says another farmer. The only other hope is that the water will fall from the sky.