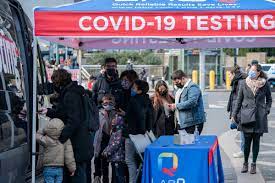 The United States has reported nearly a million new coronaviruses in one day. This is a world record that is almost twice the peak of the country, which was more than half a million cases and was recorded last week.

The number of patients hospitalized with coronavirus has increased by almost 50% in the last week and now exceeds 100,000. This is the first time that this threshold has been reached since the winter increase a year ago.

The average number of deaths per day has remained fairly stable throughout December and early January at around 1,300. They are the effects of the Omicron variant in the United States, which is transmitted much more easily than previous virus mutations. However, there is every indication that those affected have milder symptoms than in previous cases.

As is happening in Spain, the large number of Omicron cases in the United States threatens to overwhelm hospitals, some of which are already struggling to handle a wave of COVID-19 patients.

Delaware, Illinois, Maryland and Ohio are the states with the most hospitalized patients. The increase in cases has led more than 3,200 schools to close their buildings this week, and schools that have remained open face staffing shortages and renewed concerns about the spread of the virus.

Meanwhile, Joe Biden’s government has continued to emphasize widespread vaccines and reinforcements as the best way to protect against serious infections.

The US Centers for Disease Control and Prevention have recommended shortening the interval between the second dose of the Pfizer-BioNTech COVID-19 vaccine and the booster injection to five months. The third dose has also been approved for children.