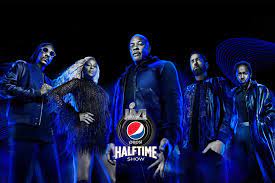 The performers in the Halftime show will be nothing more and nothing less than a large congregation of rap stars that will bear the name of The Call. The group is composed of Snoop Dogg, Eminem, Mary J. Blige, Kendrick Lamar and Dr. Dre. According to organizers this year’s intermission show will be the most epic and star-studded in Super Bowl history.

The trailer is a big advance on this promise. The 3-minute video directed by the director of the acclaimed film Straight Outta Compton, F. Gary Gray, shows a preview of what awaits viewers in the National Football League final in Los Angeles.

The announcement starts in style with Eminem fighting a cockfight with his rapper alter ego, Slim Shady. Both appear moving words on a blackboard in the style of A Brilliant Mind, while Rap God plays in the background, until the rapper receives a message on his mobile. The sequence immediately gives way to Snoop Dogg, another of history’s greatest rappers.

The California artist appears singing his famous theme The Next Episode while driving a classic car through the streets of Los Angeles before the look of surprise and interest of pedestrians. Snoop Dogg’s cell phone rings, too, and he changes course.

Next, Mary J. Blige takes the screen while Family Affair plays and recreates the glamour of a runway and preparations for a spectacular photo shoot. Upon receiving the message Mary J. Blige leaves everything and drives from New York to Los Angeles.

If the 2022 Super Bowl wants to make sure they meets the rap show expectations they couldn’t miss Kendrick Lamar in it. The Pulitzer Prize-winning rapper in the music category appears in the trailer writing his new song to Humble’s tune.

Finally, Dr. Dre appears and reveals that it is he who has been sending messages to the other musicians to join them in the SoFi stadium. The five artists meet in Los Angeles and head to the stadium where the 2022 Super Bowl final will be played while Tupac Shakur’s California Love plays in the background.

The 56th edition of the NFL final will be played on February 13, at SoFi Stadium in Inglewood, California. The city hosted the first Super Bowl in 1967 and will be the first final to be played in Los Angeles since 1993. The start of the match is scheduled for 18:30 in Los Angeles (02:30 in the morning in Spain).