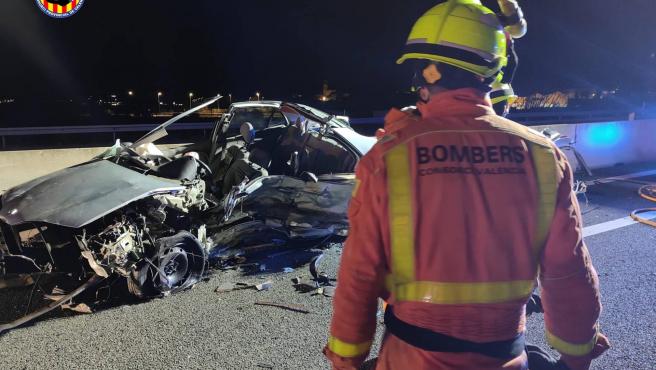 At least five people have died and five others have been injured, three of them seriously, last night in a traffic accident in Valencia, on the A7, at kilometer 395 in the direction of Alicante. Four cars were involved in the accident and one of them was apparently driving in the opposite direction.

The police are now trying to clarify the causes of the accident and to confirm whether one of those involved, who was driving in the opposite direction, was a kamikaze driver. Firefighters have had to work all night to rescue several of the victims from the iron mixes. Two of the vehicles have been completely destroyed.

According to sources from the DGT and the Provincial Fire Brigade, the warning of the accident has been received at 22:20 hours this Sunday and for now the causes that have motivated it are unknown, although Traffic points to the possibility that one of the vehicles would run in the opposite direction and collide head-on against at least one of the three remaining vehicles that have been involved.

The accident took place at kilometre 395 of the aforementioned motorway in the direction of Alicante and the seriousness of the accident has forced traffic to be cut off in that direction, so traffic is being diverted by exit 395, at the height of Xàtiva.

Three firefighters from Alzira and Xàtiva have travelled to the site. Emergency services have been working on the crash site until first thing in the morning.

In the event that it is confirmed that the car driving in the opposite direction was a kamikaze driver, this would be the latest accident of its kind, a manoeuvre that occurs with some frequency on Spanish roads and that almost always ends in tragedy.

The most notorious case in recent years is that of Kevin Cui, a young man of Chinese origin who drove the M-50 in the opposite direction under the effects of alcohol, colliding head-on with the 20-year-old Víctor López’s vehicle, who died on the spot. His father committed suicide last year after learning of Cui’s seven-year prison sentence.