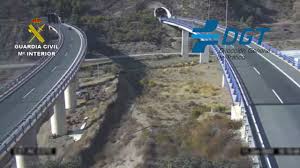 A driver is being investigated by the Guardia Civil for driving for 8 kilometers on the motorway in the opposite direction to avoid a drug control on the road for vehicles driving in the direction of Almería. The kamikaze faces road safety crimes and disobedience to authority for reckless driving.

According to the Guardia Civil, the events occurred on January 11 and, when observing the agents on the motorway, they decided to turn around and travel backwards 8 kilometers on the AP-7. Specifically, from kilometer 367 to 359, between La Mamola and Castillo de Baños.

The kamikaze puts at serious risk various drivers who crossed with him during his journey in the opposite direction. A Guardia Civil patrol attempted to intercept him at Castell de Ferro.

In addition, they set in motion several steps and asked the Malaga Traffic Control Centre for the registration numbers of all the cars that drove on this stretch between the indicated kilometers and the precise time. The cameras installed on the highway were also analyzed and thanks to this investigation they found that the vehicle was registered in the capital of Granada and belonged to a neighbor of this town.