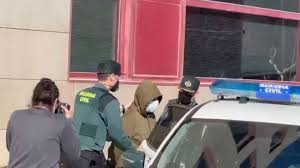 The head of the investigating court number 3 in Totana (Murcia), with jurisdiction over violence against women, has ordered the imprisonment of Johan, the 19-year-old who confessed to be the author of the death of his ex-girlfriend Claudia, 17.

The murdered minor had been missing from her home for 24 hours and Guardia Civil officers took statements from people around her, including the now detained, following a complaint from the family.

A few hours after this first statement was taken, the agents returned to the young man’s home, located in a central block of houses in Totana known for its architecture as El Quesito, to talk to him again, at which point he collapsed and confessed to the crime.

The delegate of the Government in the Region of Murcia, José Vélez, has indicated that the Guardia Civil continues to investigate the proceedings of the case.

The body was found around 3:30 hours in the morning from Wednesday to Thursday by the Guardia Civil with evident signs of violence and stab wounds in different parts of her body inside a storage room located in the second basement of the building in which Johan resides, according to Efe.

There, the judicial authority ordered the removal of her body minutes before 8 am for the transfer to the Institute of Forensic Medicine, where she will be autopsied.

With Claudia, there are 3 women victims of gender violence so far this year. Since 2003, when the victims began to be counted, 14 minors have been killed