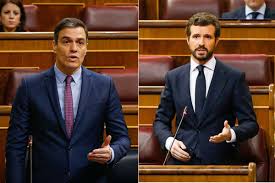 As a leader of the opposition, Pablo Casado was the first to take the floor this Wednesday morning in the Session of Control to the Government, and he did it ironically about the result of the PSOE in the elections of Castile and León 2022.

“In three of the last elections, the third political force was behind its far-left partners, despite having cheated with all the instruments of the State,” he added. ” It has cheated with the CIS of Tezanos, with the BOE of public investments by hand and even with the European funds to the letter of the socialist governments but neither with those”.

“The traps, Casado continued, are not in any case something new in his government. He showed it shortly after reaching the Moncloa placing a socialist (Dolores Delgado) in the Attorney General’s Office and then renewed without agreement, for the first time in history, the Council of State and tried to do the same, by hand, with the General Council of the Judiciary”, has launched.

Casado also recalled that Sánchez “faced the Supreme Court when he was told that he could not use separatist prisoners to remain in power”.

But the most serious thing, added the leader of the opposition, is that “use the penitentiary institutions to negotiate with a murderer of 13 innocents in exchange for Bildu’s votes to remain in the Moncloa. The question is why he voted against an initiative to ban tributes and prison benefits to ETA members who do not cooperate in clarifying their terrible crimes”.

In his turn of reply, Sánchez has said that “to disparage public institutions is also to disparage the report of the lawyers of Congress” who gave for good the vote of Alberto Casero in the vote on the labor reform and that the PP will take the Constitutional.

On the elections of Castile and León 2022 Sánchez has told Casado: “The time has come for the truth, you have to decide whether to rule with the far right or not”.

In addition, the president of the Executive has offered the leader of the opposition the “help” of the PSOE in exchange for the PP to explain “why Vox cannot enter the governments”.