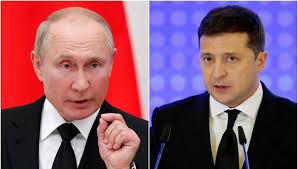 In addition, Zelenski had a conversation with the Prime Minister of the United Kingdom, Boris Johnson, in which, according to a statement from the British Government, he assured that “the next 24 hours” will be “crucial”.

Zelenski continues his contacts with European leaders, including Spanish Prime Minister Pedro Sánchez. In that conversation, Sánchez told Zelenski that Spain considers the invasion of Ukraine “intolerable” and that two Air Force planes with protective equipment and sanitary equipment have left Spain.

Johnson also conveyed to the Ukrainian president his concern about the war in which the country has been plunged and has reiterated the support of the United Kingdom. In this sense, this country has also announced a contribution of 40 million pounds in medical and military supplies “to reinforce the Ukrainian resistance of the Russian invasion,” as they have stated in a statement by Downing Street.

The main issue in these negotiations is the ceasefire and the withdrawal of Russian troops. Ukraine, at first, was not willing to negotiate in Belarus as it does not consider it a neutral ground due to the country’s close collaboration with Russian troops. Finally, they will meet in the Gomel region, but not in Minsk, the place initially proposed by Russia where the 2015 peace agreements were signed after the annexation of Crimea.

For his part, Zelensky assured that Ukraine would come to the negotiation to show that they would try a peace agreement even if the possibilities were, in his opinion, “small”.