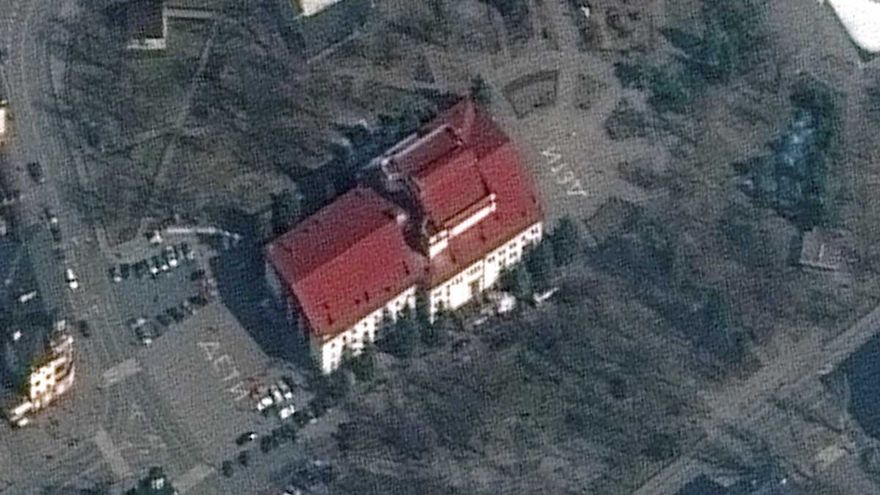 Ukraine is shocked by the terrible news of the Russian bombing of a theater in Mariúpol with 1,000 refugees inside. Local reports have underlined that the building has been reduced to rubble following the attack by Kremlin forces on Wednesday. Satellite images have revealed an aspect of a heartbreaking incident: From the sky you could read the word ‘children’ in Russian on the outside of the building.

The images were distributed by the American company Maxar Technologies. The word could be seen in large Russian letters painted on the floor outside the Mariúpol Dramatic Theatre. The same company that has revealed the images was also the one who has been revealing the position of Russian military convoys in Ukraine.

The port city of Mariúpol has suffered another horrific episode. The city is immersed in destruction. Russian Army troops are burning the city to the ground with heavy shelling since the invasion began. The Red Cross called the city “apocalyptic”. For weeks now, the Ukrainian authorities have been denouncing the lack of supplies, the town’s civilians have no water or electricity supply and medicines are becoming increasingly scarce.

The rubble-reduced theatre housed some 1,000 refugees trying to escape the harsh and intense Russian attacks on the strategic city of Mariúpol. The Ukrainian Foreign Minister, Dmytro Kuleba, has accused the Kremlin of committing another “horrible war crime” and claims that the building “is completely destroyed”.

Inside the Mariúpol Dramatic Theatre there were citizens who went in search of a shelter, according to sources of the Rada, Parliament of Ukraine. President Zelenski has denounced in his Facebook account the heartbreaking Russian bombing: “The Russian Air Force has launched a huge bomb on the theater of Mariúpol, where residents of the city had taken refuge”. It calls on the international community to declare Russia a “terrorist state”.

The adviser to the mayor of Mariúpol, Petro Andruishchenko, reported that the center was the largest shelter in the city both “in number and size”. Rescue teams have been dedicated to rescue survivors from the rubble, at the moment the death toll is unknown.