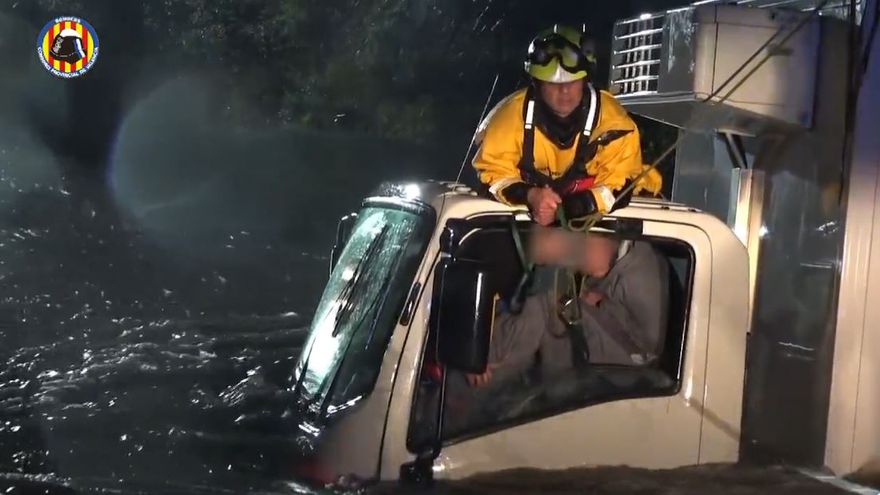 The Atlantic storm that entered with force on Monday through the southeast of the peninsula has caused intense and persistent rains in that area of the map that, in some cases, have resulted in torrents and floods that have caused numerous material damage. In Quart de Poblet, Valencia, the torrential rains have almost ended in tragedy.

Two walkers were trapped inside their vehicle in the middle of a flood and when the force of the water-whose height covered more than half of the truck-was close to dragging them, a fire team managed to save them. For this, it was necessary to use, even, a small pneumatic boat, to which the transporters got on after going out through the windows of the vehicle, which was swallowed by the water soon after.

Valencia is being the community most affected by the rains in this beginning of the week next to the provinces of Tarragona and Teruel. In these regions, rainfall is causing serious inconvenience in several points and the State Meteorological Agency (Aemet) has asked to take extreme precautions in the Spanish southeast.

The river Palancia, for example, has marked its passage through Sagunto a historic flood and in Eslida, Castellón, the streets have been flooded. The strong current has overflowed the river and caused the cutting of a road. In addition, the River Ana has overflowed as it passes through Burriana, also in Castellón.

The city of Castelló, in fact, stood Monday as the place in Europe with the most precipitation accumulated in 24 hours and the fourth in the world, with a total of 108’6 liters per square meter, according to the World Meteorological Organization (WMO).

Aemet sources have pointed out that, of the 6,029 stations in the world that sent their data to the WMO network this Monday, Castelló occupies the fourth place, behind Bauerfield Efate (Vanuatu), with 315 liters in 24 hours; Teresopolis (Brazil), with 151 and Yakushima (Japan), with 124.