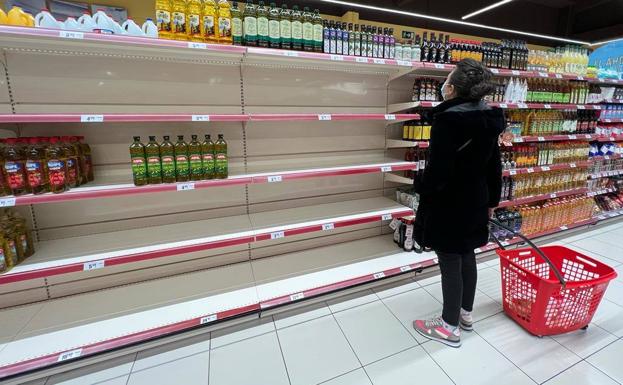 Fewer trucks have left Mercamadrid since the indefinite strike began. The Madrid City Council recognizes the problems occur when sending products to other provinces, but that the Community of Madrid will not have shortages. Mercamadrid also pointed out that there is no risk of shortages of “fresh food”.

They also asks for moderation in shopping, to buy what is necessary because this fear of shortages causes customers to make compulsive purchases leaving the shelves of some supermarkets empty.

Fearing a shortage of products due to the transport workers’ strike, customers buy compulsively leaving empty shelves in some supermarkets with the aim of stockpiling basic products.

“The most essential thing is not there, flour, rice,” complained one client. Another client said that the oil and lentils have also gone.

Some supermarkets warn that there will be a lack of some products due to the strike of transporters, that’s already been going on for more than a week. The volume of sales has increased and they warn that if you buy compulsively they will not be able to replenish the products at the same pace.

The transport workers’ strike began 11 days ago. The Ministry of Transport meets with the main transport associations, but not with the Platform that calls for an indefinite strike.

This Friday, March 25, the National Platform for the Defense of Transport has called a large march at 10:00 hours in the Plaza San Juan de la Cruz of the capital and will march through the Paseo de la Castellana.