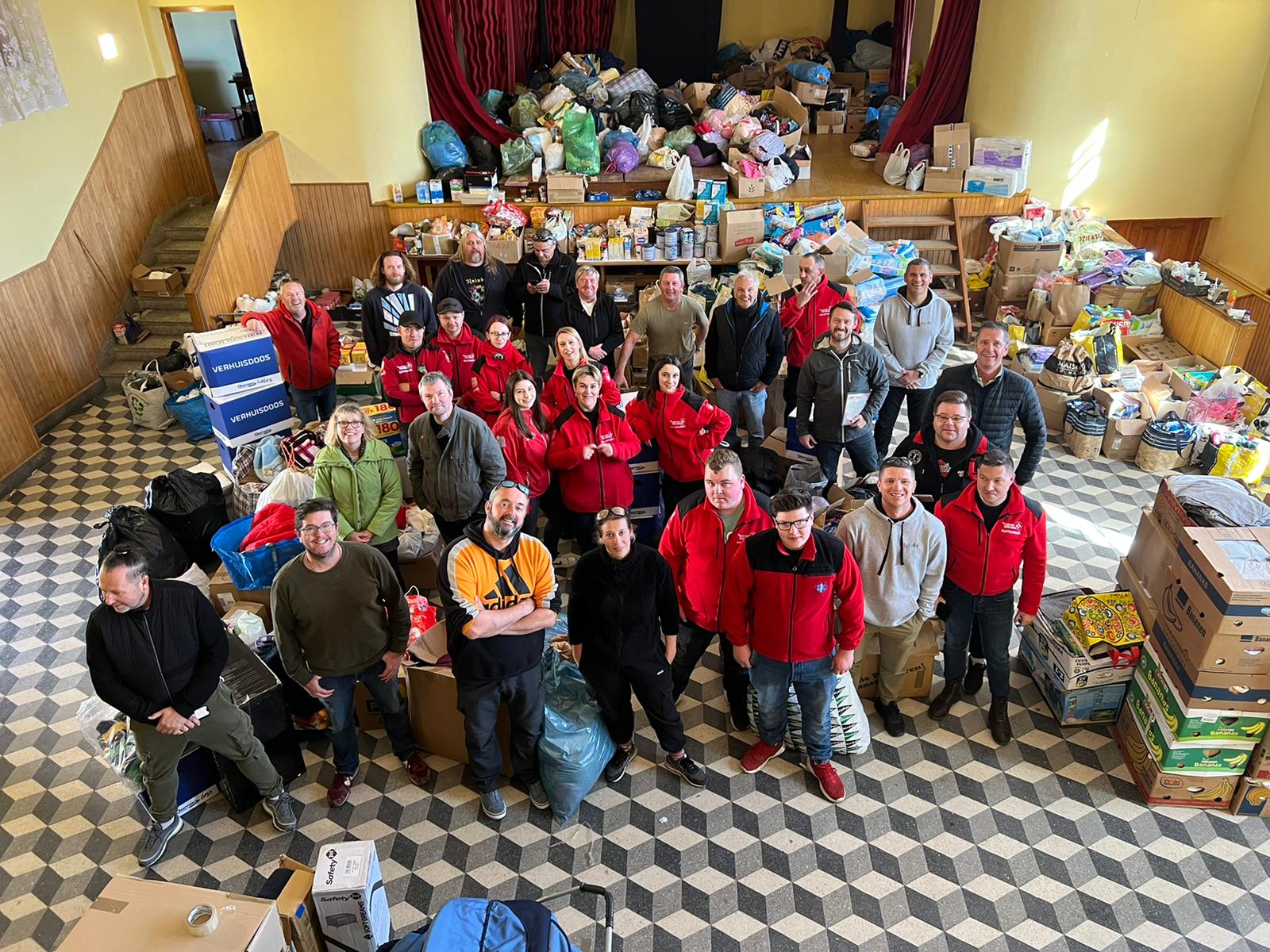 On Friday 25th March 2022 a convoy set off from the Marina Alta toward Poland, all the cars were packed with essential items. The convoy met in Benissa betweek 4 and 5 am and set off for the long journey ahead.

They arrived at the French border around 5pm the same day, and continued the journey to Poland.

They arrived in Krakow on Saturday 26th March and went to the hotel to have a well deserved rest after the long drive throughout the night, the hotel was across from the railway station and the town square where they are receiving refugees from Ukraine.

Kal then sent the team at BayRadio a recording with information, you can listen to it below

Kal and richard have also been talking to us live on air with more information and then later on that night they all enjoyed a well deserved dinner.

Kal then spoke with team leader Richard about the journey and what the next steps they were going to take.

They set off early in the morning on Sunday 27th March towards the border between Ukraine and Poland to unload the humanitarian aid.

Next Kal wanted to everyone to meet the amazing team that formed the convoy, here’s Charlie and Bob who are driving car number 4.

They arrived to the drop off point to leave the humanitarian aid that everyone took.

Kal was then joined by Dominika, a Polish aid worker, that has been helping collect all the aid.

Kal then spoke to Peter and Danielle, who are driving car number 3.

Once everything was unloaded they head out to the hotel, Kal then went to see the Ukranian refugee reception tents in the town square of Krakow, Poland.

Around 12pm they set off again towards the Poland-Ukraine border, around half an hour drive from Lviv, Ukraine. They drove down in convoy with aid vehicles and ambulance lead and rear. They also had a Ukranian ”interpreter” that took over driving the car as they were going into ‘hostile’ territory. Most of the eleven vehicles and teams returned to Krakow. Only three went in the convoy to the front line. Kal and Jason being one of them.

Kal then received some WhatsApp messages that show how amazing the work that everyone is doing, this is the message we received from Kal:

Unbelievable! As we drive to the border a BayRadio listener has been talking to her friend in Ukraine and given her my number. The lady in Ukraine has just sent me a series of WhatsApp messages and pictures detailing her situation and asked if we can help get her out. Our team leader Richie is trying to arrange this right now. All the right paperwork has to be completed to avoid people trafficking. More on this story as it develops. 🇺🇦

The team then arrived to the holding area where the refugees get their ID number to be able to travel around Europe, this area is 5km away from the Poland-Ukraine border.

Kal then got more information about the lady that contacted him from Ukraine that was asking for help to get out of the country, Oleksander and Dominika helped talk to the family.

The team was unable to travel further towards the border because of the security situation after the attack on Lviv the night before, so they headed back to Krakow, where Oleksander took over the car radio and Kal and Jason were treated to a crash course in Ukranian music.

Kal then decided to be funny and try and prank Andy and sent us the photo below, it’s a shame he got a photo of a right hand drive!

After that Andy sent them on a mission, they had to find a bottle of Żubrówka Bison Grass Vodka to bring back to the office.

More refugees arrived in Krakow from Ukraine around 11:30 pm. The team were working har on sorting paperwork out to be able to bring them to Spain. It was an early night for them as they leaft at 4:30 am this morning, when the 32 and a half drive back to Spain would begin.

Next we have the meet and greet of the rest of the team, here is Frank, driver of car number 5.

Kal and Richard then gave us an update:

And then Kal spoke to James, who is the co driver of car number 1 along with Richard.

The journey back to Spain then began around 5 am this morning whilst picking up people over town and then met just outside Krakow. The cars are currently driving back with 21 refugees.

Kal then spoke to Danny and Gareth, drivers of car number 2.

And here’s Wyatt and James, who weren’t sure what car number they were.