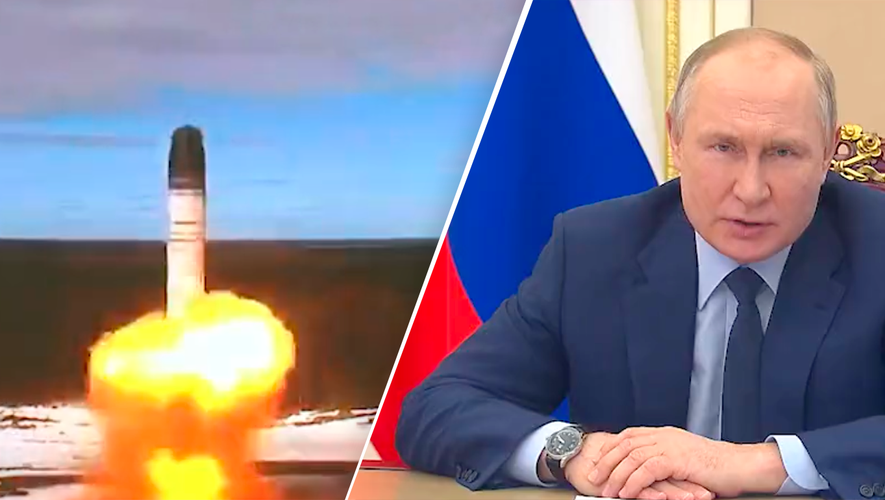 Russian President Vladimir Putin showed the planet his new secret weapon on Wednesday, threatening the West with the escalation of the Russian invasion of Ukraine in 2022. It is an intercontinental missile capable of reaching even the United States. Inside it can withstand a nuclear load and could take the lives of millions of people. The secret weapon of the Kremlin leader has been baptized with the macabre name ‘Satan II’. Russian television broadcast the first test of a missile that “will make people think twice about threatening our country,” he warned.

The intercontinental ballistic missile ‘Satan II’ and its destruction capability is enormous with a range of up to 18,000 kilometers and can cause a huge shock wave. The new step of the Kremlin leader does nothing but further increase tensions between Russia and the West with the war in Ukraine always present. The test was conducted from the Plesetsk cosmodrome and reached its destination 6,000 kilometres away, at the Kurá polygon on the Kamchatka Peninsula (Pacific). Putin congratulated the Russian Army on the “successful launch”.

Russia is expected to deploy 10 or more warheads each ‘Satan II’, as reported by the US Congressional Investigation Service. “This truly unique weapon will strengthen the combat potential of our armed forces, reliably ensure Russia’s security from external threats and cause those who, amid aggressive rhetoric, attempt to threaten our country, Think twice,” Putin said sharply during the televised launch.

The Kremlin claims that the missile’s impact is capable of destroying an area the size of the state of Texas, that is, nearly 700,000 square kilometers. The Russian president indicated that it would be virtually unstoppable. ” The new system has the highest tactical and technical characteristics, and is able to overcome all missile defense capabilities”. Russia’s message is clear, sharp and concise in the midst of escalating war in Ukraine, with the recent start of the great battle in the Donbas.

‘Satan II’ has been in development for years and the Russian Federation claims that there is nothing like it on the entire planet. The head of the Russian aerospace agency called the ballistic missile a “gift to NATO”. The Pentagon has been quick to respond to the new Russian threat.

The United States has responded to the Kremlin’s new threat to the West, the country’s president, Joe Biden, spoke out after the launch of ‘Satan II’. ” I knew they were tough and proud, but I’ll tell you they’re tougher and prouder than I thought,” he said from the White House. Biden made no direct reference to the missile but exclaimed that “NATO is more united and strengthened as ever before” by the war in Ukraine.

US Defense Department spokesman John Kirby downplayed the launch and said the tests did not surprise them as they are “routine”. He added that the “department remains focused on the illegal and unprovoked aggression” of the Russian invasion of Ukraine in 2022.

Jack Watling, from the ‘Royal United Services Institute’ (RUSI) think tank, explained that the launch was related to symbolism and power posture. ” The timing of the test reflects that the Russians want to have something to show as a technological achievement in the run-up to Victory Day, at a time when much of their technology has not delivered the results they would have liked in Ukraine,” he added. Meanwhile, the war in Ukraine continues with heavy fighting in the Donbas and the takeover of the port city of Mariúpol.