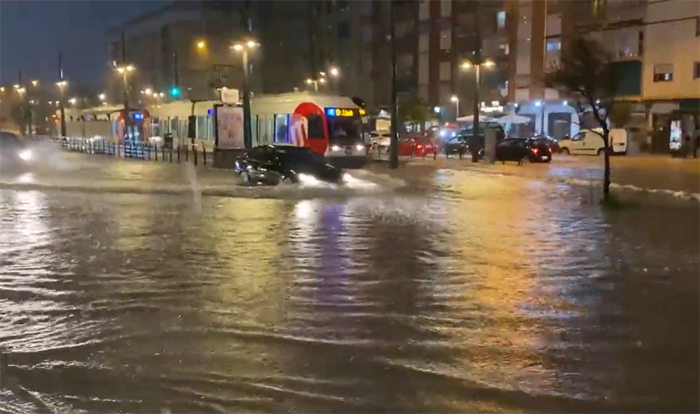 The storm in Valencia has left a historic flood in the last few hours. The capital and nearby towns have spent a very complicated morning with the day of May with greater rainfall accumulated since 1871, according to data of the State Meteorological Agency (AEMET). From 00.00 hours to 22.40 hours on Tuesday exceeded 200 liters/m2 of precipitation accumulated at the observatory in Valencia, said AEMET.

Residents of Valencia recorded the floods without giving credit, the metro of the city, was completely flooded and have had to close several stations. As well as the tunnels of the city, completely overflowing. The streets of Valencia have been dense rivers for hours. The flood has caused total chaos that will take time to recover, the Polytechnic University of Valencia has suspended its classes this Wednesday

Valencia beats the record, on Tuesday more than 200 liters/m2 of rain and during the night it continued raining. The containers have been dragged, the sewers were not enough and flooded tunnels and subway evidence the greatest flood in the history of Valencia. Getting home became an ‘impossible mission’. In some areas, the water covered the cars above the wheels. The buildings and shops have not escaped from an unprecedented stream of water either.

The emergency services have performed dozens of services due to the intensity of the rains in Valencia. The members of the Provincial Fire Brigade have carried out rescues in the municipality of Paterna. Rescues of three people from a vehicle, an ambulance driver and a woman who could not leave an area near the station.

Firefighters from Valencia and the Local Police have made intense efforts throughout the night from Tuesday to Wednesday. Especially in the areas of Malva-rosa, Cabanyal and Nazareth.