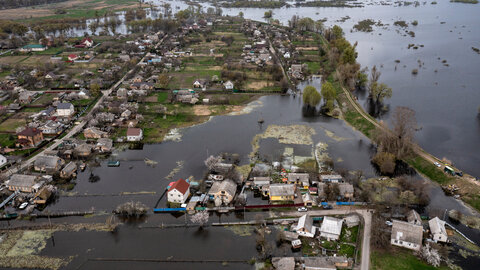 Demydiv is a village north of Kiev, which has been flooded to stop the advance of Russian tanks. Ukrainian soldiers opened the floodgates of a dam on the Dniper River and formed a large water flow that thwarted the Kremlin army’s assault. This hydraulic warfare as a defense tactic has been a success against the Russians.

“Of course it is good that we suffered these floods. How would it be if they had crossed the river and advanced towards Kiev” says a neighbor. But now they have paid the price of victory. A third of the fields are underwater and many houses are flooded, but they are very proud nonetheless.

“The Russians came and wanted to cross. From the forest our soldiers fired several missiles at the dam and the village flooded. We saved Kiev,” says another neighbor

A strategy which they have used in other areas of Ukraine, they have blown up more than 300 bridges, such as the one at Irpin, to access the capital, and they have also bombed roads. The goal is to curb the Russians and divert the columns of tanks to less favorable terrain.