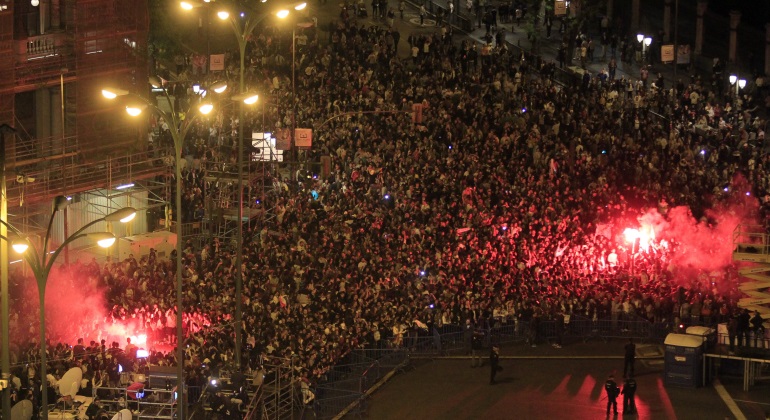 Around 400,000 people gathered this Saturday in Madrid’s Plaza de Cibeles to celebrate the 14th European Cup won in Paris by Real Madrid against Liverpool. With scarves and flags with the shield and the club name, the attendees have gathered in Cibeles, where they have chanted “why wouldn’t I love you” or “we are the kings of Europe”, among other chants. The celebration has left 51 people injured, five of them by flare burns and the rest by falls, faints and bruises.

In addition, 22 other assists have been made in the environment of Estadio Santiago Bernabéu during the Champions League final match between Real Madrid and Liverpool. None of the cases dealt with have been serious, according to Emergencias Madrid.

The celebration has also resulted in four detainees for public disorder and three police injured, according to the Government delegation. The sources of Emergencias Madrid have highlighted that in general the concentration was carried out without incidents of consideration despite the great concentration of fans who gathered in the square of the celebrations.

In the afternoon of this Sunday Cibeles welcomed the fans of Real Madrid with the presence of the team that proceeded to the traditional rite of offering the European trophy to their goddess. Madrid left at 17:00 hours from the Santiago Bernabéu stadium to go to the cathedral of Almudena, then they arrived at the headquarters of the Presidency of the Community of Madrid, in the Puerta del Sol and, finally, the entire squad went through the Race of San Jerónimo, Alfonso XII and Montalbán until the Cibeles Palace where they offered the title in the Madrid City Council.

At 20:00 hours, a convertible bus took the team to the Plaza de Cibeles, where they were about 30 or 40 minutes celebrating the Champions League with the tens of thousands of madridistas who meet there. Around 22:00 hours the show organized by Real Madrid in the stadium began.