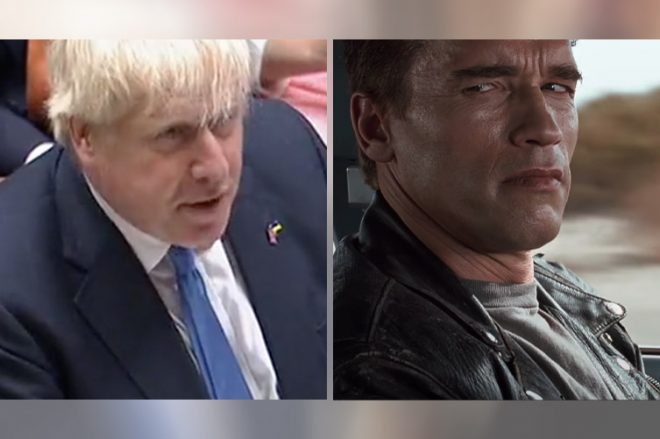 The Prime Minister of the United Kingdom, Boris Johnson, has faced this Wednesday the last session of questions at the head of the Government. At the end of the session, and honoring his eccentric image, Johnson has said goodbye to the House of Commons emulating Terminator with a “hasta la vista, baby”.

After these words, the prime minister received a big ovation from his parliamentary group. During the session, he valued his work as head of the British Government and assured that he is leaving “with the mission accomplished”.

For the Tory politician, holding the position of prime minister has been a “great privilege”. He has made it clear that he is proud to have carried out Brexit, as well as to overcome the Covid pandemic and to have faced the threat of Russia in Ukraine.

On the other hand, he gave several recommendations to his successor in office, which will be elected on September 5. He calls on the next prime minister to have a “fixed front” view and to ensure “freedom and democracy”.

The opposition has also had words for the almost former prime minister. Labour opposition leader Keir Starmer has said that although his relationship with the prime minister is “complicated,” he wishes “the best for the future” to the entire Johnson family.

Lindsay Hoyle thanked the president for his work during a health crisis that brought “very dark moments to this chamber”. Even so, she wanted to clarify that all opinions on the legacy of Johnson will be preserved “with passion”.

The leader of the Tories has avoided commenting on the candidates to take over his post, but he has recognized that there is “a lot of talent”. The favorites to succeed Johnson are, for now, Rishi Sunak, former Minister of Economy; Penny Mordaunt, current Secretary of State for Trade; and Liz Truss, Secretary of State for Foreign Affairs.

Boris Johnson has concluded his last session in the House of Commons with a “hasta la vista, baby”, imitating Arnold Schwarzenegger in ‘Terminator 2: The Last Judgment’. He has left the room amid cheers from his group, which he received less and less support from after the Downing Street scandals. Johnson will definitely step down in September.