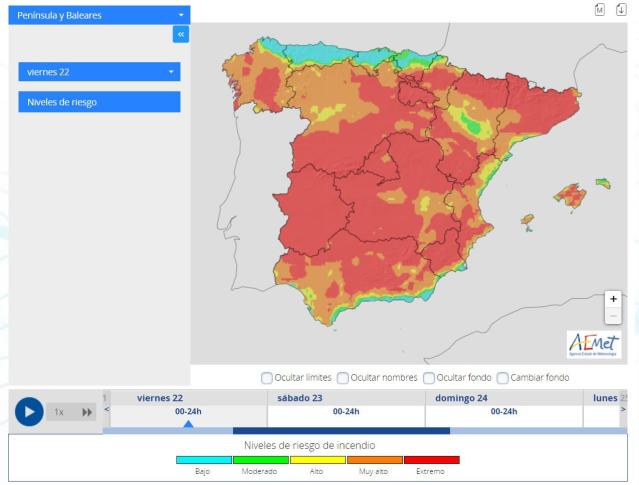 While Spain is still submerged in a wave of fires that devastates everything, the State Meteorological Agency (AEMET) has stepped in to confirm that it will be able to predict the risk of fires seven days in advance. A week that can be very important to activate the fire protocol in areas where that risk exists, which right now is almost the entire Peninsula, influenced also by the high temperatures that complicate the situation much more.

At the moment, the north is the only area in Spain that is not on alert for fire risk, with Asturias, Cantabria, the Basque Country and a small part of Galicia that manage to escape the tragic situation that exists in the rest of the Peninsula, with the inner areas as the most damaged. The Region of Madrid, La Rioja and all of Extremadura remain on red alert for fire risk.

The red alert has also been extended to other communities such as Castilla-La Mancha, Andalucía, Castilla y León, Region of Murcia, Aragon, Catalonia, Navarre, Balearic Islands and Galicia, which, although it does not expand throughout the territory, does occupy an important part of each autonomy. Areas that are not on red alert, are usually on orange alert, and cover a very notable part of the Spanish map, since the zero risk is only visible in the north and a small part of the south.

The good news in the midst of all this is that the sweltering heat wave could begin to subside soon. Next Wednesday, temperatures are expected with maximum 36º C, which will be permanent over the next few days. In addition, meteorologists believe that all the heat that has hit during these days will begin to move to Eastern Europe and will give a respite to some ‘victims’ such as Spain, the Netherlands or the United Kingdom.

Although it is still early to confirm the stabilization of temperatures, there is faith that August is a month less warm, and where the softness of the thermometer is more pleasant than in this suffocating month of July. However, mercury holds for now 40 º C, symbol that there are still a few days before this nightmare can begin to have an end.