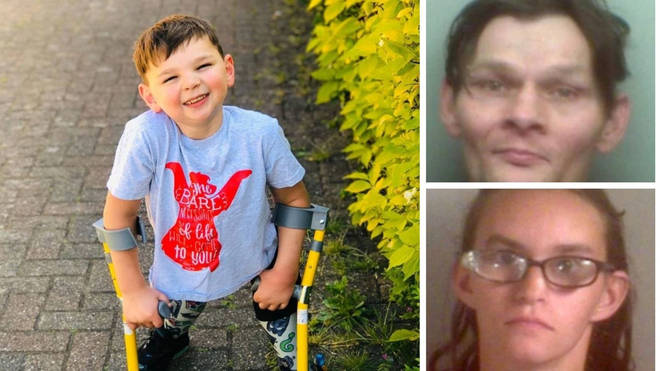 Jody Simpson, 24, and Anthony Smith, 47, were sentenced to 10 years in prison for torturing their baby so harshly that he lost both his legs. Although they have only served five of the ten years set out in their 2018 sentence, they will soon be released from prison.

Tony, the affected minor, suffered from torn ligaments, broken fingers and contracted sepsis due to the torture to which he was subjected. He almost died, but the doctors managed to save his life. His adoptive mother, Paula Hudgell, 54, has called for more severe punishment for the minor’s parents.

“These monsters have spent only five years behind bars, while Tony faces a lifetime of challenges as a result of their wickedness,” Hudgell told the British media ‘The Mirror’. In addition, she went on to say that Tony is angry about the release of his biological parents from prison and that he aspires to become a police officer, when he is older, to put them back in prison.

Simpson and Smith were only sentenced after an extensive campaign by Hudgell and MP Tom Tugendhat. The campaign was in favor of the Tony Act, which imposes higher sentences for those who have caused “serious harm” to children between the ages of 10 and 14. This new law also means that those found guilty of causing the death of a child face a minimum sentence of 14 years in prison.

Tony’s adoptive mother added in her statements that “they don’t have to go on parole board and don’t have to show any remorse to go free. It’s like a punch in the stomach and it makes me sick to know that those who abuse babies and children are free in a few years. These monsters could be living on your street and you wouldn’t have a clue”.