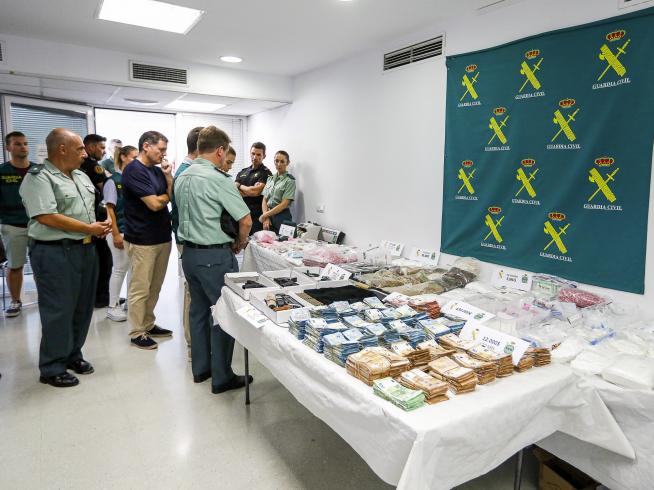 This Tuesday, agents of the Guardia Civil dismantled a drug gang that was in charge of the manufacture and trafficking of drugs in Ibiza. In the same way, a quantity of pink cocaine or ‘tusi’ amounting to 13.25 kilos has been confiscated. This is the largest package of this drug ever seized in Spain.

This has been possible thanks to the police operation ‘Via Fora’, whose success has ended with a total of 12 people detained in Ibiza, in addition to two others who were in Colombia. The value of all the drugs confiscated, including the aforementioned pink cocaine, reaches 2.3 million euros.

The drug, seized by agents of the Organized Crime Task Force of the Central Operational Unit (UCO), together with Europol, the British NCA and the Directorate of Investigation and Interpol of the Colombian National Police, has been exposed in the barracks of the Guardia Civil in Ibiza.

On the other hand, other assets owned by members of the drug gang have been confiscated, such as high-end vehicles, luxury watches, mobile phones, computer systems, important documentation for the investigation and three small firearms and a silenced submachine gun, weapons that are not covered by the law.

The chief colonel of the area, Alejandro Hernández, has reported that the criminals were “very violent” and that they threatened other gangs with these weapons to make sure they would pay them. They also carried out what is known as ‘rollover’, which involves stealing drug shipments from drug networks.

As for the two detainees in Colombia, Hernandez has indicated that they were there to settle a relevant purchase of drugs, which were brought to Ibiza from the Colombian territory itself, as well as from the United Kingdom, and entered with trucks through the Ibizan port.

In addition, the colonel added that the first indications of the investigation suggest that they had begun to operate in the islands with the pandemic, which they took advantage of to act “discreetly”.

Due to the dangerousness of the criminal gang, Hernández has made it known that the police presence has been reinforced to achieve a “safe tourism” and that, those who want to enjoy the party of Ibiza, do it “in a healthy way”. Meanwhile, the operation continues and new arrests are not yet ruled out.