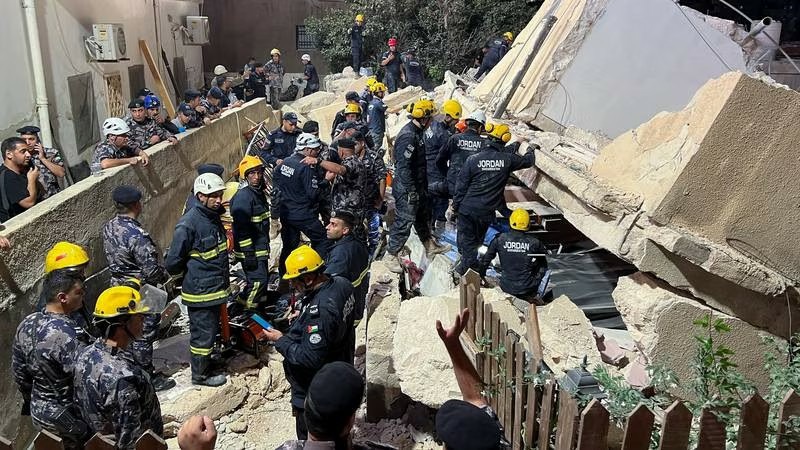 A residential building in Amman (Jordan) collapsed yesterday, Tuesday, leaving numerous people injured and at least nine dead. Authorities in the capital of the Middle Eastern country quickly mounted a heavy rescue operation – ongoing – to evacuate people trapped by the tragedy. In the last few hours a miracle has occurred: rescue teams have managed to pull a four-month-old baby alive from the rubble after 24 hours of being buried.

At the time of the collapse there were about 25 people in the building, authorities continue to search for several missing people who may be buried under the rubble.

Faisal al Shabuol, Jordan’s Minister of State for Information Affairs, warned on the day of the collapse that the death toll could be as high as ten. “There are indications that some of them are alive,” he explained on state television. He stressed that the building was in a mountainous area of Webdeh, one of the oldest districts of Amman, something that makes rescue efforts difficult.

The director of Civil Defense, Hatem Yaber, stressed that some 350 troops are working the rescue operations with “manual equipment” as the building is surrounded by large buildings. “The only access to the site is a corridor one and a half meters wide, which prevents the use of large machinery,” he explained.

Those rescued during the first three hours “said that members of their families are still under the rubble”. The director assured in front of journalists that “we assume that those trapped are alive”. Drones and police dogs are also participating in the operation. A technical committee will be formed to determine the cause of the collapse and identify those responsible.