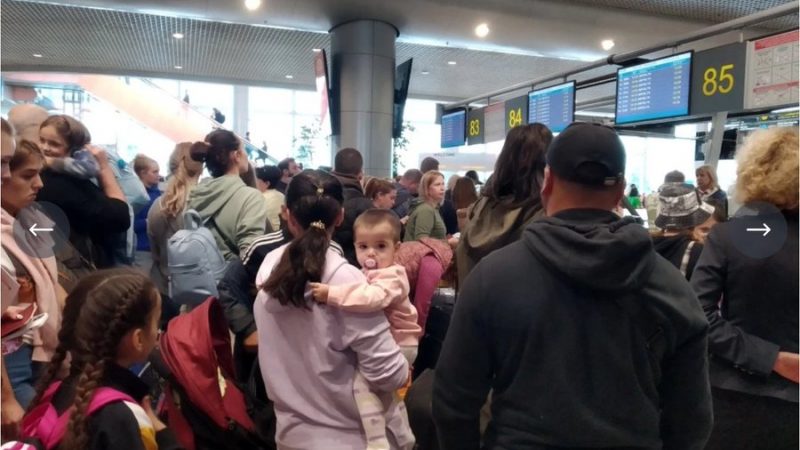 Vladimir Putin’s announcement of partial military mobilization has sparked panic in Russia, where much of its citizens are trying to escape the country before the situation continues to worsen. The exodus of the Russians is reminiscent of the one carried out by the Ukrainians at the beginning of the war on 24 February and there is no memory of a similar number of escape attempts since Nazi Germany tried to invade the Soviet Union in World War II.

Flights to cities that do not require visas, such as Istanbul (Turkey), or Yerevan, the capital of Armenia, are already completely booked. Aware that the situation was getting out of hand, the Kremlin announced last afternoon that it prohibited all men between the ages of 18 and 65 from leaving the country and that they were therefore fit to fight. College students, retirees or minors are out for now.

Protests in Russia have intensified with the passing of hours: there are already more than a thousand detainees who have demonstrated against the partial military mobilization. Russia is increasingly divided, which has caused Putin to radicalize his speech, with a much more aggressive tone, to avoid escaping the iron control that now holds over the whole country, and which is becoming much harder for him to maintain.

Yandex, the so-called ‘Russian Google’, has registered a very noticeable increase in the phrase ‘how to break an arm’. The desperation of Russians who cannot flee is such that they seek a way to injure themselves so as not to be called up and have to fight in Ukraine. Hours before this phrase was ‘trending topic’ in Russia, what dominated was ‘how to leave Russia’, in an attempt to find a transport that would allow leaving the country.

Russian citizens who have already escaped live in very different situations. In the case of Katerina, she assures us that she will not return to Russia while the war continues: “We will not return. Nobody wants to die without reason”. However, there are people who do not have the same luck, as another Russian citizen tells us: “My family and my parents are there. That’s why I have to go home”.